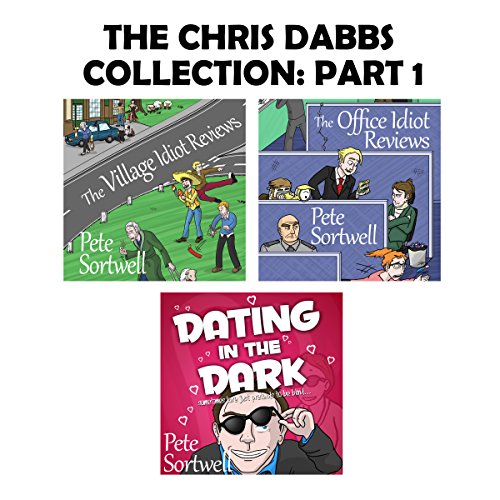 This collection of comedy audiobooks read by Chris Dabbs includes The Village Idiot Reviews, The Office Idiot Reviews, and Dating In The Dark: sometimes love just pretends to be blind.

Join Brian as he tries to woo the girl that works in the local shop. Will passing out face down in superglue while trying to make her a gift hinder his chances of going out with her?

Will Father Frederick, an alcoholic vicar who has a slight issue with stalking, be able to win back the heart of a woman he loved a long time ago?

Written entirely in the form of product reviews, we guarantee you've never heard a book quite like this. Hilarious and wholly original, The Village Idiot Reviews pokes gentle fun at the more obscure corners of your favourite e-commerce sites - and introduces the most bonkers set of countryside dwellers since The Vicar of Dibley.

There are all sorts of idiots we have to work with every day. Every office has them. However, Hogsbottom Plugs, "the home of bath plugs", has a higher concentration than other workplaces. From the MD down to the cleaner, they're all idiots.

Hear the trials and tribulations of this idiotic workforce as they explain their recent life events through reviews of things they've bought. There's Donald, who simply cannot get the office junior to notice him, let alone drink some of his special sleeping-tablet-laced tea. Learn how Jeff gets his own back on the people who mock him by re-enacting a video he saw on Youtube involving seagulls. And watch in horror as the overworked cleaner tries to solve the mystery of who is making his job of cleaning the toilets worse than a job cleaning toilets is already.

Dating In The Dark: sometimes love just pretends to be blind

Jason is single and has been for all of his 32 years. It's depressing. But not as depressing as being told by his mother that he looks like Humpty Dumpty - after the accident. With a face that not even his own mother can love, it's hardly surprising that he'll try anything to get a woman to go out with him, even if it's only for a single date.

Along with Barry - his best mate - Jason comes up with the only thing he thinks will work: dating a blind woman. However, to do that, he needs to pretend he's blind himself, which is a lot harder than you might think...especially when guide dogs are so hard to come by.

Eventually Jason's efforts pay off and he meets Emma, a pretty professional with a host of friends. When he takes her out, they instantly hit it off. But will Jason be able to fool both Emma and her best friend Jerry into thinking he's blind? Jason faces the biggest challenge of his life, and nobody - especially not him - can see how it'll all turn out.