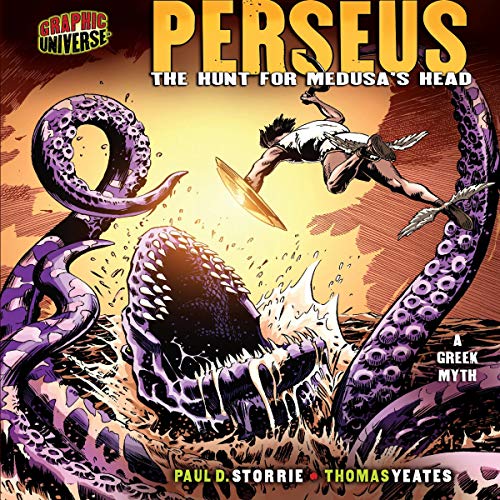 Could a monster whose very look turns men to stone be a challenge too perilous even for the son of Zeus? King Polydectes has designs on Perseus' mother, Danaë. But first the king must get rid of young Perseus once and for all. So Polydectes hatches a plan to trick the young hero into performing an impossible task - slay the snake-haired Gorgon monster Medusa, whose very look turns men to stone. Yet, as the son of Zeus, king of the gods, Perseus has many powerful allies. Will Perseus' strength and courage - and the favor of the gods - allow him to do the impossible?

Please note: The original source audio for this production includes noise/volume issues. This is the best available audio from the publisher.

"This spring, the movie heroes of true mythic proportions are those that find their roots in the legends and traditions of ancient Greece. Percy Jackson & the Olympians: The Lightning Thief (PG) debuted last month and Clash of the Titans (not yet rated), another live-action thriller, premieres in theaters on April 2, 2010. Loosely based on the tale of Perseus, this Warner Bros. remake of a 1981 film stars Sam Worthington as the monster-vanquishing champion along with Ralph Fiennes as Hades and Liam Neeson as Zeus. Visit the film’s official Web site for a punch-packing preview of the stunning special effects and epic-scale battle action.

Grab the eye and interest of teen moviegoers with a tantalizing selection of Greek mythology titles guaranteed to appeal to YA sensibilities. Encompassing a variety of tastes and reading levels, this round-up includes guidebook-style browsers, traditional retellings, flashy graphic novels, imaginatively fleshed-out novelizations, and more. There's something for everyone here, whether they're already experienced in the whys and wherefores of the Greek pantheon or newcomers to Zeus' realm, fans of superhero tales, or romance devotees.

With kinetic covers featuring gods in battle-ready postures, George O'Connor's new Olympians series (First Second; Gr 6 Up) does a fantastic job of persuading readers to explore the Greek pantheon. The first volume introduces Zeus: King of the Gods, (2010) from his sheltered boyhood to his Titanic-toppling mêlées to his ascendance to the throne. The second installment (April, 2010) presents five thrilling tales about Athena: Grey-Eyed Goddess, beginning with her dramatic emergence - 'fully clothed, fully armored, already a young woman' - from Zeus' skull. These stylish graphic novels unfold with cinematic scope and full-scale drama, balancing carefully researched retellings with superhero kapow. The artwork is stunning, presenting fully revved-up action scenes as well as lighter moments. Back matter includes character profiles, notes from the author, discussable points, and reading lists. Kids will await the debut of the rest of the 'Olympians' with baited breath.

From Hercules: The Twelve Labors (2007) to Perseus: The Hunt for Medusa's Head (2008) to The Trojan Horse: The Fall of Troy (2007), Lerner's Graphic Universe offers a series of graphic novel retellings of well-known adventures that will captivate comic-book fans (Gr 6-9). The tales feature clearly conveyed storylines, concise dialogue, suspense-filled action, and bright-colored visual fireworks. A glossary and further reading list end each volume, and the reinforced bindings will stand up to rigorous circulation. Check out the impressive range of available titles at the publisher’s Web site." (School Library Journal)