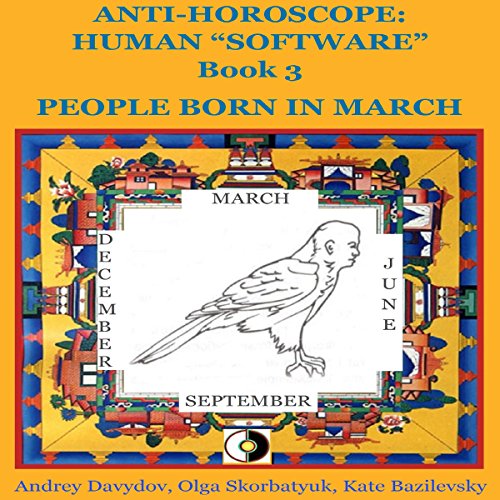 Did you know, for example, that people who were born on March 4 in leap years or March 5 in common years are not only people-pendulums subject to fluctuations, which lead them to completely opposite states, typical "double bottom" people, but also are real sexual maniacs? Did you know that they have hypertrophied sexual needs and in sex are like sewing machines: they can "stitch" all day and night?

Did you know that people who were born on March 9 of leap years or March 10 of common years are like giant ovens: they diligently study various philosophical, religious, psychological, scientific, and cultural systems only in order to "burn" it all later, saying: "This is nonsense"? Also, did you know that they can get anyone drunk, that is - bring anyone to the state of alcoholism?

Hence the question: are you sure that you know people, whom you think you know as your own self? Yes, of course, you know them, if we take wordplay into account. You really do know them, like you know yourself - that is: just as badly! You know your own and other people's masks and roles, but that is all. You do not believe this? Then, listen to this book and hear for yourself! This book is for those people who are fed up with "horoscopism", who are tired of listening to nonsense about themselves and other people from psychologists or their "all-knowing" relatives, friends, and acquaintances. It will help you save not just some time in your life, but your whole life, because otherwise you will spend your entire life on something that is a priori impossible. And, it is impossible not because you are idiots, but because Homo sapiens cannot fully know themselves and other people without an external (and, most importantly, objective) source. Perhaps that is the reason why humanity was left "factory instructions" to each one of us - the Catalog of Human Population!