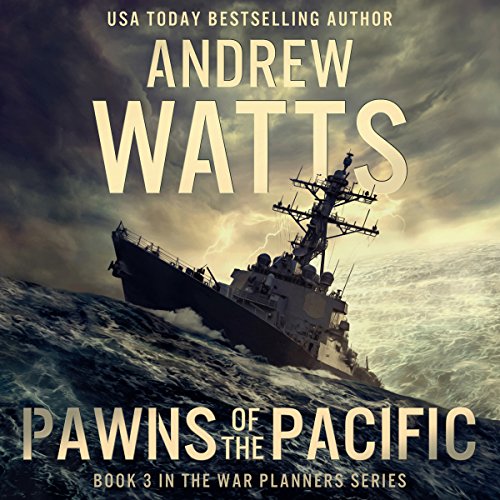 Pawns of the Pacific

Pawns of the Pacific is the electrifying third book in The War Planners military technothriller series.

While the United States is preparing for war with Iran, Chinese billionaire Cheng Jinshan and his wicked spy, Lena Chou, are moving their pieces on the board. Deception and misinformation are everywhere.

Now, in order to save America, the leaders in the CIA and Pentagon have set up a secretive task force at the CIA headquarters. Their mission: to thwart Jinshan's plans, and reveal the truth to the world.

Each member of the Manning family has a critical role to play. David Manning is brought in to the CIA task force. Chase Manning is sent to team up with a US Marine Corps special operations unit. Admiral Manning leads the USS Ford Carrier Strike Group, filled with America's latest and greatest naval technology. And Lieutenant Commander Victoria Manning is the officer in charge of a helicopter detachment on the navy destroyer, the USS Farragut - the only ship that stands in the way of a Chinese onslaught.

Filled with pulse-pounding action, well-rounded characters, and unpredictable twists, Pawns of the Pacific delivers a satisfying third chapter to The War Planners series.