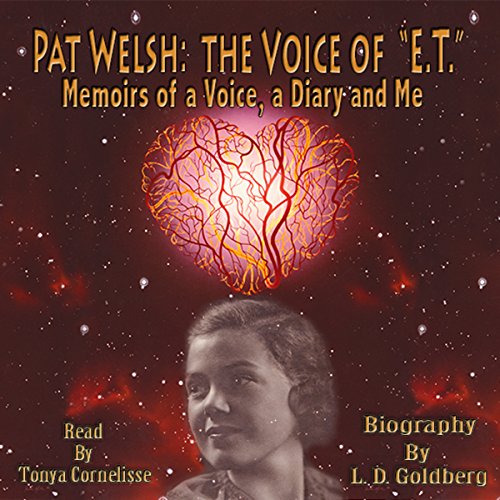 My book details the life, both early and later, of Pat Welsh, who found fame in 1982 as the voice of E.T. in Steven Spielberg’s immortal film classic about an alien who was left behind on Earth. The narrative includes entries from Pat’s personal diary (written in 1931, at the age of sixteen), stories of an adult Pat, and contemporary perspectives.

Pat Welsh was born in 1915 in San Francisco and came from an affluent family. Her grandfather, Robert S. Atkins, owned a popular department store in the city. Her parents divorced when she was only two, and her mother remarried some years later.

The diary provides the framework for the book, and beginning with New Year’s Day, 1931, Pat writes with beauty and clarity about many aspects of her life, including her longing for fame, her romantic stirrings, the popular culture of her time, and the city and its surroundings. Among her favorite spots were Hillsborough (including escapes to the famous but deserted 98-room Carolands Mansion), Carmel, San Mateo, Pebble Beach, Monterey, and Santa Barbara. Her observations on school-year dating, and necking, bring to life a bygone era. She talks about the ordinary - getting her driver’s license, sitting for a portrait that her grandmother is painting - and the not-so-ordinary, much of it reflective of the films and plays of the day.