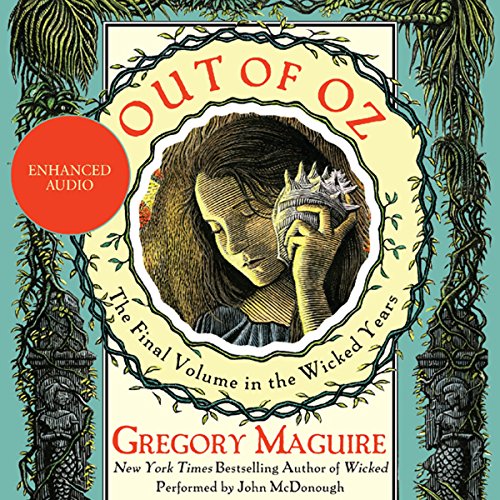 Gregory Maguire's Wicked Years series became national best sellers and the basis for a hit Tony-winning Broadway musical. Now, Maguire returns with the final installment in his transformative work, a thrilling and compulsively readable saga in which the fate of Oz is decided at last.

Once peaceful and prosperous, the spectacular Land of Oz is knotted with social unrest: The Emerald City is mounting an invasion of Munchkinland, Glinda is under house arrest, and the Cowardly Lion is on the run from the law. And look who's knocking at the door. It’s none other than Dorothy. Yes. That Dorothy.

Yet amid all this chaos, Elphaba’s granddaughter, the tiny green baby born at the close of Son of a Witch, has come of age. Now it is up to Rain to take up her broom - and her legacy - in an Oz wracked by war.

The stirring, long-awaited conclusion to the best-selling series that began with Wicked, Out of Oz is a magical journey rife with revelations and reversals, reprisals and surprises - the hallmarks of the unique imagination of Gregory Maguire.