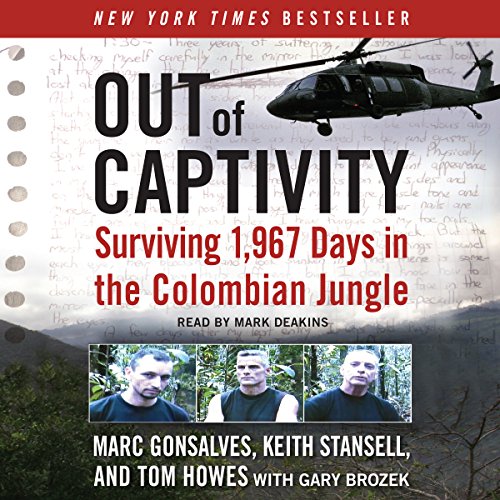 The Revolutionary Armed Forces of Columbia-People’s Army - known popularly as FARC - is a guerrilla organization (considered by some to be terrorist in nature) that advocates a violent imposition of Marxist-Leninist politics in Columbia. If you are a U.S. Defense Department contractor, the FARC region of the Columbian jungle is not where you want your plane to crash land. And yet, that is exactly what happened to a group of Americans in February of 2003.

Mark Deakins performs this harrowing story of those who survived the crash and nearly 2000 days in FARC captivity. In alternating sections, the survivors recall terror, exhaustion, insects, sicknesses, and many other maladies endured in their long wait for freedom. Particularly interesting is that a fellow captive was Columbian politician Ingrid Betancourt.

On February 13, 2003, a plane carrying three American civilian contractors - Marc Gonsalves, Keith Stansell, and Tom Howes - crash-landed in the mountainous jungle of Colombia. Dazed and shaken, they emerged from the plane bloodied and injured as gunfire rained down around them.

As of that moment they were prisoners of the FARC, a Colombian terrorist and Marxist rebel organization. In an instant they had become American captives in Colombia's volatile and ongoing conflict, which has lasted for almost 50 years.

In Out of Captivity, Gonsalves, Stansell, and Howes recount for the first time their amazing tale of survival, friendship, and, ultimately, rescue, tracing their five and a half years as hostages of the FARC. Their story takes you inside one of the world's most notorious terrorist organizations, going behind enemy lines with vivid and haunting imagery. Their words conjure a reality that few people have ever encountered, from sleeping on beds literally carved out of the jungle to escaping Colombian military air strikes under the cover of darkness, to being bound with steel chains by their captors.

Though the physical punishments their bodies endured were unrelenting, the psychological battles they waged were the ultimate test of their resolve. With candid detail, Gonsalves, Stansell, and Howes relate the perilous mental struggles they each experienced, as they grappled with feelings of guilt, fear, and anxiety for the families and lives they'd left behind. Exposing the transformative power of captivity, they show how they turned these fears into strengths, using their memories and their families, their pasts and their futures, to motivate them in their quest for survival.

Despite the odds and the conditions, despite the chains and the silence, and despite the often tense relationships they experienced with their fellow Colombian hostages, they had one another, forging a bond that allowed them to cope with the horrific conditions of their...