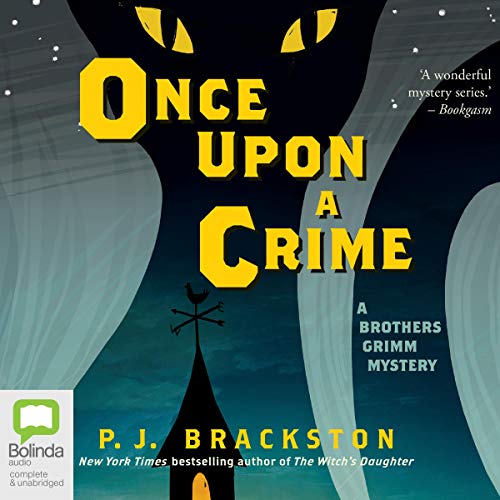 Once Upon a Crime

Once Upon a Crime

Gretel's latest investigation goes less than smoothly after a dead man is found in her rooms with her hunting knife sticking out of his chest in the whimsical second Brothers Grimm-inspired novel.

Gretel (yes, that Gretel) is now 35, very large, still living with her brother Hans, and working as a private investigator.The small, sleepy town of Gesternstadt is shaken to its pretty foundations when the workshop of the local cart maker is burnt to the ground, and a body is discovered in the ashes. It is Gretel who notices that the cadaver is missing a finger. At first she does not see this as significant, as her mind is fully focused on a new case. Not that she wouldn't far rather be investigating an intriguing murder, but her client is willing to pay over the odds, so she must content herself with trying to trace three missing cats.

It is not until she is further into her investigations that she realises the two events are inextricably and dangerously connected, and that the mystery of the missing cats will lead her into perilous situations and frightening company. Very soon Gretel finds herself accused of kidnapping Princess Charlotte, twice locked up in the cells at the Summer Schloss, repelling the advances of an amorous troll, strapped to a rack in Herr Schmerz's torture chamber, and fleeing a murder charge. With dubious help from her brother (whose scant wits are habitually addled by drink), she must prove her innocence, solve the puzzle of the unidentified corpse and find the stolen cats before they meet a grisly end.