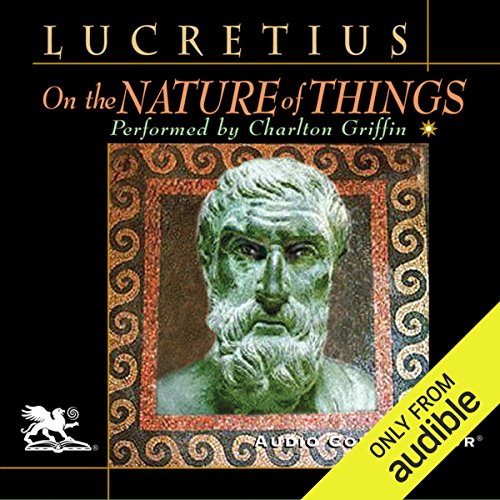 On the Nature of Things

This famous work by Lucretius is a masterpiece of didactic poetry, and it still stands today as the finest exposition of Epicurean philosophy ever written. The poem was produced in the middle of first century B.C., a period that was to witness a flowering of Latin literature unequaled for beauty and intellectual power in subsequent ages. The Latin title, "De Rerum Natura", translates literally to "On the Nature of Things" and is meant to impress the reader with the breadth and depth of Epicurean philosophy.

The poem's scope, even by modern standards, is staggering. Lucretius peers into the secrets of nature with a kind of innocent curiosity and offers a "scientific" explanation for all sorts of phenomena: stars and planets, oceans and rivers, plant life, reproductive activities, the soul and immortality, and the nature of the gods, among others. According to Lucretius, mankind can be freed from the stifling structures of religion and superstition by studying the works of the Greek philosopher Epicurus. All it takes is the strength of character to look at the natural world in an uncompromisingly level and unemotional way, to observe and live in the world according to precepts laid down by the great Epicurus in the fourth century B.C. That being so, according to Lucretius, it will be possible for man to lay aside superstition and fear and to become as godlike as he can.

Even though humanity was driven by hungers and passions it little understood at the time, Lucretius' bold poem sought to embolden men with the self confidence to get along in the world without recourse to myths and gods. In order to free themselves, men would have to adopt a personal code of self-responsibility that consisted of living and speaking personal truths founded on the work of Epicurus. "On the Nature of Things" is about the universe and how men should live in it.

Das sagen andere Hörer zu On the Nature of Things