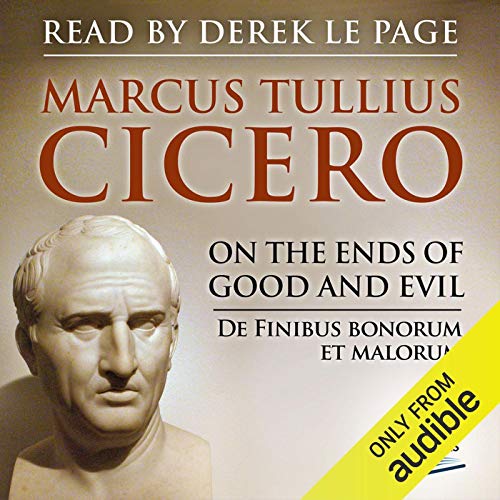 On the Ends of Good and Evil

Towards the end of his life and his career as one of the leading politicians and orators in Rome, Marcus Tullius Cicero (106 BCE-43 BCE) was exiled to his country house. It was a time of political turmoil in the capital of the empire, caused by the power-grab of Julius Caesar.

In the quiet of the countryside, Cicero began to write on philosophy. In On the Ends of Good and Evil, he set out to consider three major traditions of Greek philosophy - Epicureanism, Stoicism and a branch of Platonism proposed by Antiochus of Ascalon (promoting 'the happy life').

Using a form of the dialectical approach established by Plato in his Socratic Dialogues, Cicero introduces characters who propose each tradition, and then Cicero himself responds with a critical appraisal - a stimulating and engaging pattern.

De finibus bonorum et malorum (meaning also the 'final or ultimate aim' of good and evil) is a fascinating document. And, as suiting a man of the world (which Cicero clearly was), he comes to a preferred conclusion after surveying the three traditions. Interestingly, the work opens with an introductory passage in which Cicero explains why he is writing a work such as this, giving an intriguing insight into his time.

In Rome, he explains, the study of Greek philosophy was the preserve of Romans who read Greek, and translations of the originals into Latin were frowned upon by scholars. Cicero felt this lofty attitude should not be the case. The wisdom of the past should be open to everyone, he argues, and he proceeds to summarise the Greek philosophic traditions and offer critiques for the benefit of his fellow Roman citizens.