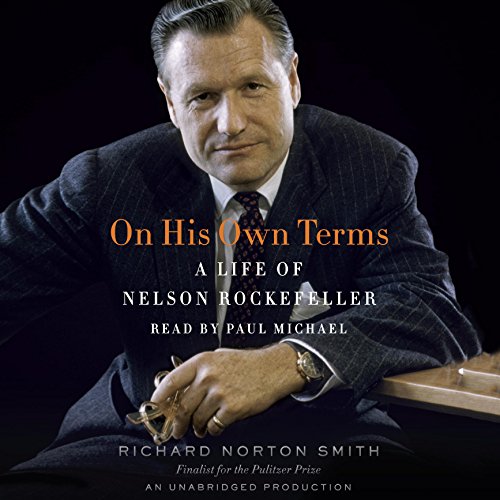 “The amount of first-class scholarship Richard Norton Smith undertook to write about Nelson Rockefeller is utterly remarkable. This is one of the greatest cradle-to-grave biographies written in the past 50 years. It’s never dull and always joyfully lucid. Highly recommended!” (Douglas Brinkley, author of Cronkite)

From acclaimed historian Richard Norton Smith comes the definitive life of an American icon: Nelson Rockefeller - one of the most complex and compelling figures of the 20th century.

Fourteen years in the making, this magisterial biography of the original Rockefeller Republican draws on thousands of newly available documents and over 200 interviews, including Rockefeller’s own unpublished reminiscences.

Grandson of oil magnate John D. Rockefeller, Nelson coveted the White House from childhood. “When you think of what I had,” he once remarked, “what else was there to aspire to?” Before he was 30 he had helped his father develop Rockefeller Center and his mother establish the Museum of Modern Art. At 32 he was Franklin Roosevelt’s wartime coordinator for Latin America. As New York’s four-term governor he set national standards in education, the environment, and urban policy. The charismatic face of liberal Republicanism, Rockefeller championed civil rights and health insurance for all. Three times he sought the presidency - arguably in the wrong party. At the Republican National Convention in San Francisco in 1964, locked in an epic battle with Barry Goldwater, Rockefeller denounced extremist elements in the GOP, a moment that changed the party forever. But he could not wrest the nomination from the Arizona conservative, or from Richard Nixon four years later. In the end, he had to settle for two dispiriting years as vice president under Gerald Ford.

In On His Own Terms, Richard Norton Smith re-creates Rockefeller’s improbable rise to the governor’s mansion, his politically disastrous divorce and remarriage, and his often surprising relationships with presidents and political leaders from FDR to Henry Kissinger. A frustrated architect turned master builder, an avid collector of art and an unabashed ladies’ man, “Rocky” promoted fallout shelters and affordable housing with equal enthusiasm. From the deadly 1971 prison uprising at Attica and unceasing battles with New York City mayor John Lindsay to his son’s unsolved disappearance (and the grisly theories it spawned), the punitive drug laws that bear his name, and the much-gossiped-about circumstances of his death, Nelson Rockefeller’s was a life of astonishing color, range, and relevance. On His Own Terms, a masterpiece of the biographer’s art, vividly captures the soaring optimism, polarizing politics, and inner turmoil of this American Original.

“Richard Norton Smith has brought us a gripping, magisterial, deeply researched life of one of the most intriguing figures in American political history. In Smith’s vivid rendering, Nelson Rockefeller is exuberant, talented, conflicted, apparently unstoppable, and then, ultimately, poignant amid the frustration of his Ozymandian ambitions. Along with the tale of Rockefeller’s life, On His Own Terms also brings us a timely, knowing close-up view of what used to be called - at its zenith, which now seems so long ago -the ‘Rockefeller wing’ of the Republican party.” (Michael Beschloss, author of Presidential Courage: Brave Leaders and How They Changed America, 1789–1989)