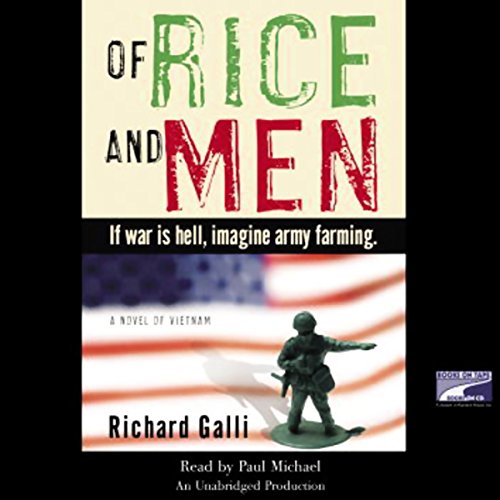 Of Rice and Men

Spreading democracy takes more than cutting-edge military hardware. Winning the hearts and minds of a troubled nation is a special mission we give to bewildered young soldiers who can't speak the native language, don't know the customs, can't tell friends from enemies, and, in this wonderfully outrageous Iraq-era novel about Vietnam - wonder why they have to risk their lives spraying peanut plants, inoculating pigs, and hauling miracle rice seed for Ho Chi Minh.

Brash, eye-opening, and surprisingly comic, Of Rice and Men displays the same irreverent spirit as the black-comedy classics Catch-22 and MASH as it chronicles the American Army's little known "Civil Affairs" soldiers who courageously roam hostile war zones, not to kill or to destroy, but to build, to feed, and to heal. Unprepared, uncertain, and naive, they find it impossible to make the skeptical population fall in love with them.

But it's thrilling to watch them try.

Among the unforgettable characters: Guy Lopaca, an inept Army-trained interpreter who can barely say "I can't speak Vietnamese" in Vietnamese, but has no trouble chatting with stray dogs and water buffalo. Guy's friends include "Virgin Mary" Crocker, a pragmatic nurse earning a fortune spending nights with homesick soldiers; Paul Gianelli, a heroic builder of medical clinics who doesn't want to be remembered badly, so he never goes home; and Tyler DeMudge, whose cure for every problem is a chilly martini, a patch of shade, and the theory that every bad event in life is "good training" for enduring it again.

Pricelessly funny, disarming, thought-provoking, as fresh as the morning headlines, and bursting with humor, affection, and pride, Of Rice and Men is a sincere tribute to those young men and women, thrust into our hearts-and-minds wars, who try to do absolute good in a hopeless situation.

"This is a clever, quirky, surprisingly uncynical view of Vietnam." (Publishers Weekly)
"The novel unfolds with beguiling tenderness, humor, and wisdom." (Booklist)