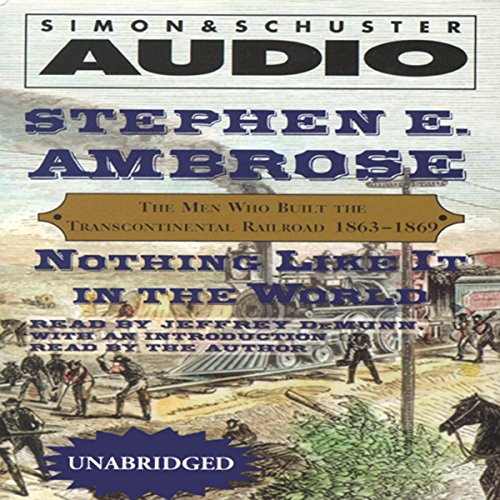 My father listened to this on a cross-country drive and hasn't stopped talking about it since - I mean, he tells anyone and everyone about this audiobook. So, of course, I had to listen to it. Only Stephen Ambrose could bring to life in such vivid detail the greatest achievement of the 19th century and the brave men who laid mile upon mile of track by hand. It is a fascinating story. (Kirsten, Editor)

Nothing Like It in the World is the story of the men who built the transcontinental railroad. In Ambrose's hands, this enterprise comes to life. The U.S. government pitted two companies - the Union Pacific and the Central Pacific railroads - against each other in a race for funding, encouraging speed over caution. As its peak the work force approached the size of Civil War armies, with as many as 15,000 workers on each line. The surveyors, the men who picked the route, lived off buffalo, deer, and antelope.

In building a railroad, there is only one decisive spot - the end of the track. Nothing like this great work had ever been seen in the world when the last spike - a golden one - was driven in Promontory Peak, Utah, in 1869, as the Central Pacific and Union Pacific tracks were joined.

Ambrose writes with power and eloquence about the brave men - the famous and the unheralded, ordinary men doing the extraordinary - who accomplished the spectacular feat that made the continent into a nation.

"... telling of the railroad's physical construction will be a sure winner with the author's legions of readers." ( Booklist)
"... bears the reader on shoulders of wonder and excitement." ( The New York Times)

Das sagen andere Hörer zu Nothing Like It in the World