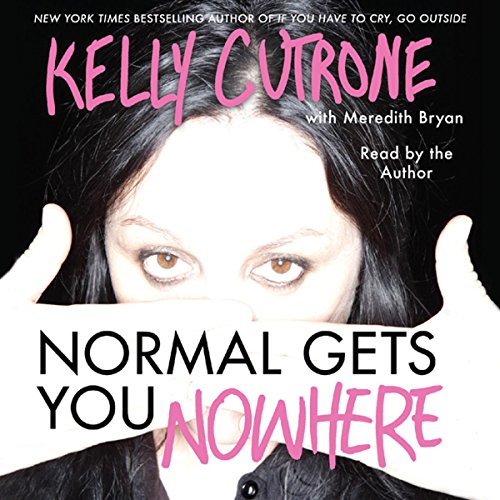 Normal Gets You Nowhere

nor-mal: according with, constituting, or not deviating from a norm, rule or principle / conforming to a type, standard, or regular pattern / of, relating to, or characterized by average intelligence or development

Who wants to be that?

When Kelly Cutrone’s first book, If You Have to Cry, Go Outside, was first published, young people flocked to this new voice - finally, someone was telling it like it is, in language they spoke. It quickly became a New York Times bestseller, and fashion publicist Kelly Cutrone became more than a personality, she became a beloved guru, mentor, and fairy godmother.

Now she’s back with another no-holds-barred book to awaken our souls and kick our asses into gear. With Normal Gets You Nowhere, she invites us to get our freak on. History is full of successful, world-changing people who did not fit in. Think Nelson Mandela, Joan of Arc, Eleanor Roosevelt, Amelia Earhart, John Lennon, and Rosa Parks. Instead of changing themselves to accommodate the status quo or what others thought they should be, these people hung a light on their differences - and changed humanity in the process.

“I know you don’t feel normal, so why are you trying to act it and prove to everyone you are?” Cutrone says. So much of what we say or don’t say, and what we do or don’t do, is dictated by what others have told us, or what people may think of us. This is not how we should be living, by measuring ourselves against the mundane.

An invitation to rethink who you are, what you value, and what you want from life, Normal Gets You Nowhere goes beyond how to reinvent yourself and create your own brand, and investigates what it means to live in this world as a tuned-in, caring individual with a passion for making a difference. There’s already an army of super talented uberfreaks changing the world–isn’t it time you joined it time you joined them?

Candid, spiritual and never boring. In love with this side of Kelly Cutrone. A must read for all ages