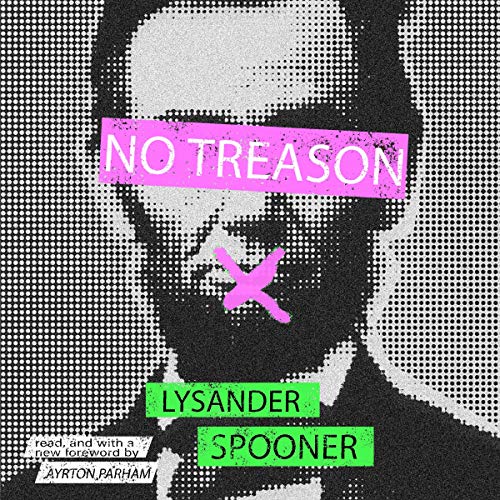 No Treason: The Anarchist Classic with a New Introduction

No Treason: The Anarchist Classic with a New Introduction

Lysander Spooner was one of slavery’s fiercest enemies. As a lawyer, he offered free legal services to escaped slaves, defending them in court. He advocated smuggling guns to slaves, with which to overthrow their masters, and take possession of their property. “Give the Slave-holders, then, a taste of their own whips.”

Yet when the Civil War erupted, Spooner wasted no time in opposing the Union’s war against the Confederacy. After the war, when Northern troops occupied the conquered Southern lands, purging their governments of the warped scaffolding that had propped up slavery for centuries, Spooner called them the enemies of freedom.

What odd logic could harmonize these seemingly dissonant opinions? What philosophy could possibly despise slavery, and despise Abraham Lincoln?

The answer lies in the essay before you, Lysander Spooner’s most influential work: No Treason.

Here you will find many unorthodox, and certainly unpopular, perspectives. Many notions, foundational to our concept of democracy, will be questioned, and the solutions offered will undoubtedly run against the grain of our upbringing, and everything we’ve been told about freedom.

He’ll advocate peace and violence, the rule of law, and anarchy.

You may not be convinced, but you will certainly be interested.