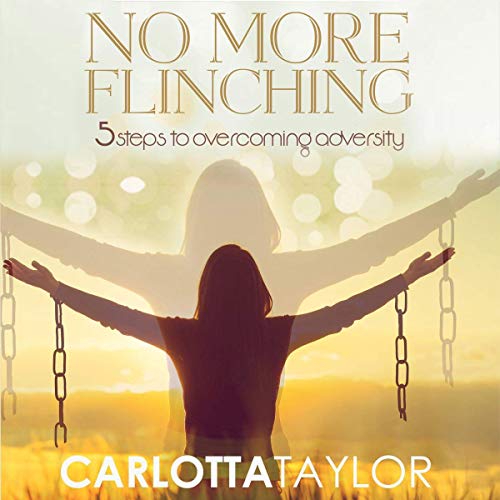 What is the audioook all about?

Are you afraid of adversity?

Always turning back, running, hiding, and flinching when life gets too hard?

In this new audiobook, you'll gain the strategies to overcome adversity, gain the courage to eliminate fear that hold you back from speaking up and fighting for what you believe in.

You'll finally give yourself permission to live life to the fullest. You'll hear the story of Carlotta Taylor-Franks' journey. Transferred from 26 various foster homes and shelters. Flinching was her reaction right before her father often punched her in the face. Even after her parents divorced, she still flinched if someone reached for something near her.

Until one day, it all stopped. She didn't flinch anymore. Most importantly, she learned how to forgive her father.

From foster care to living in too many shelters to count, depression, and suicidal attempts, Carlotta Taylor, author and speaker, knows that it was nothing but the grace of God that kept her from jail, the streets, or worse. Transferred from 26 various foster care homes because of abuse and neglect, she learned early on that if she didn't transform her mind, she would be consumed by the chaotic world around her. Realizing that nothing just happens and that God uses even our suffering to be a blessing Carlotta seeks to inspire others to press beyond their breaking point, even if she only touches one person.

Severely beaten by her father, and suffering mental, spiritual, and physical abuse in the many foster homes she once resided in, Carlotta encourages people worldwide to know that their difficulties in life do not have to define their future. As a former homicide detective, child protection detective, and former federal officer, with over 15 years law enforcement experience, she knew she had to use her knowledge and wisdom to effect greater change in and around the community. As the founder of Somebody Step In, Inc., a non-profit for foster children, teens, and young adults, she offers coaching and mentorship in education, life skills, and more.

"A delightful guide that advocates one's ability to heal through expression. To fully heal a person, one must heal the mind, body, and spirit. Carlotta Taylor fully expresses her inner spirit, in order to heal herself and more importantly, others through the words and works of God. An excellent read for those that have overcome adversity and challenges in this lifetime!" (Dr. Keyon Pittman, Ed.S, ND)