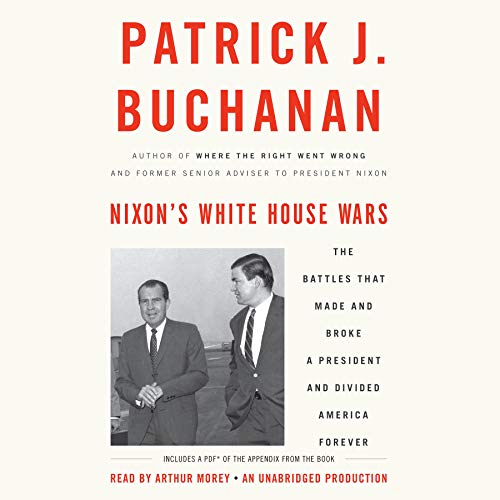 From Vietnam to the Southern Strategy, from the opening of China to the scandal of Watergate, Pat Buchanan - speechwriter and senior adviser to President Nixon - tells the untold story of Nixon's embattled White House, from its historic wins to it devastating defeats.

In his inaugural address, Nixon held out a hand in friendship to Republicans and Democrats alike. But by the fall of 1969, massive demonstrations in Washington and around the country had been mounted to break his presidency.

In a brilliant appeal to what he called the "Great Silent Majority", Nixon sent his enemies reeling. Vice President Agnew followed by attacking the blatant bias of the media in a fiery speech authored and advocated by Buchanan. And by 1970, Nixon's approval rating soared to 68 percent, and he was labeled "The Most Admired Man in America".

Then one by one, the crises came, from the invasion of Cambodia, to the protests that killed four students at Kent State, to race riots and court ordered school busing.

When the Watergate scandal broke, Buchanan urged the president to destroy the Nixon tapes before they were subpoenaed, and fire Special Prosecutor Archibald Cox, as Nixon ultimately did in the "Saturday Night Massacre". After testifying before the Watergate Committee himself, Buchanan describes the grim scene at Camp David in August 1974, when Nixon's staff concluded he could not survive.

In a riveting memoir from behind the scenes of the most controversial presidency of the last century, Nixon's White House Wars reveals both the failings and achievements of the 37th President, recorded by one of those closest to Nixon, from before his political comeback through to his final days in office.