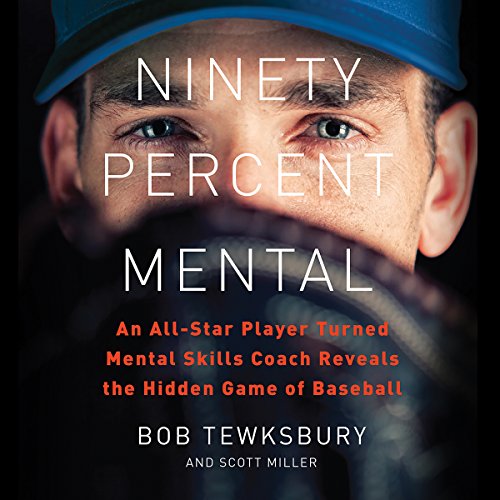 Tewksbury explores the fascinating psychology behind baseball, such as how players use techniques of imagery, self-awareness, and strategic thinking to maximize performance, and how a pitcher's strategy changes throughout a game. He also offers an in-depth look into some of baseball's most monumental moments and intimate anecdotes from a "who's who" of the game, including legendary players who Tewksbury played with and against (such as Mark McGwire, Craig Biggio, and Greg Maddux), game-changing managers and executives (Joe Torre, Bruce Bochy, Brian Sabean), and current star players (Jon Lester, Anthony Rizzo, Andrew Miller, Rich Hill).

With Tewksbury's esoteric knowledge as a thinking-fan's player and his expertise as a "baseball whisperer", this entertaining book is perfect for any fan who wants to see the game in a way he or she has never seen it before.

Ninety Percent Mental will deliver an unprecedented look at the mound games and mind games of Major League Baseball.

"Bob Tewksbury and Scott Miller combined to produce a must-read book for anyone fascinated by the mental side of baseball. This is about so much more than the journey of a veteran pitcher. It's about the journey of one of baseball's most inquisitive minds." (Jayson Stark, former senior columnist, ESPN.com)

"Tewks and I were teammates when Tewks was ending his career with the Twins. I saw him use his mind to be successful on the mound. Years later, we were once again on the same team with the 2013 World Series champion Red Sox, and I again saw him use his mind - this time to help others. I know he helped us win, and I know this book can help anyone who reads it." (David Ortiz, 10-time All-Star, three-time World Series champion, and New York Times best-selling author of Big Papi: My Story of Big Dreams and Big Hits; called "the most important player in Boston Red Sox history")