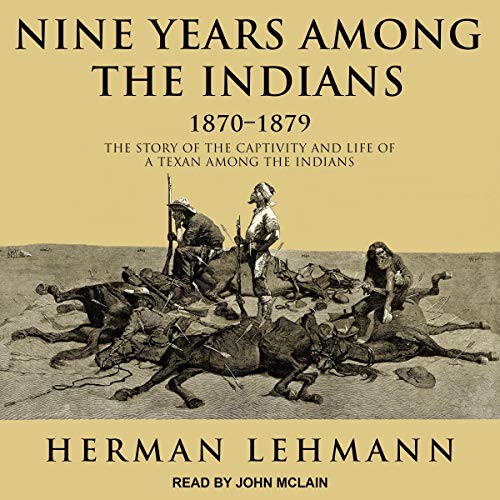 The Story of the Captivity and Life of a Texan Among the Indians
Autor: Herman Lehmann
Sprecher: John McLain
Spieldauer: 5 Std. und 16 Min.
Kategorien: Biografien & Erinnerungen, Historisch
3,5 out of 5 stars 3,5 (2 Bewertungen)

As a young child, Herman Lehmann was captured by a band of plundering Apache Indians and remained with them for nine years. This is his dramatic and unique story.

His memoir, fast-paced and compelling, tells of his arduous initial years with the Apache as he underwent a sometimes torturous initiation into Indian life. Peppered with various escape attempts, Lehmann's recollections are fresh and exciting in spite of the years past.

Lehmann provides us with a fascinating look at Apache, and later, Comanche culture. He tells of their rituals and medicinal practices and gives an insight into Native American manufacture of arrowheads, saddles, and shields.

After a few years, Lehmann became completely integrated into the warrior life, joining in on raids throughout the Southwest and Mexico. Nine Years Among the Indians tells of violent clashes with white rangers and other Native American tribes, scalpings, and the violence of life in 19th-century Western America.