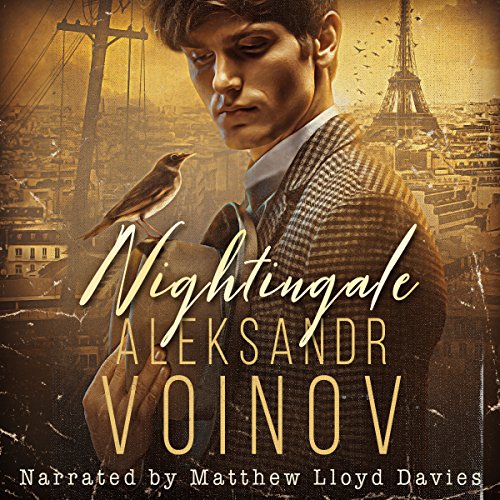 In Nazi-occupied Paris, most Frenchmen tread warily, but gay nightclub singer Yves Lacroix puts himself in the spotlight with every performance. As a veteran of France's doomed defense, a survivor of a prison camp, and a "degenerate", he knows he's a target. His comic stage persona disguises a shamed, angry heart and gut-wrenching fear for a sister embedded in the Resistance.

Yet Yves ascends the hierarchy of Parisian nightlife to become a star, attracting the attention - and the protection - of Nazi Oberst Heinrich von Starck. To complicate matters further, young foot soldier Falk Harfner's naïve adoration of Yves threatens everything he's worked for. So does Aryan ideologue von Grimmstein, rival to von Starck, who sees something "a bit like a Jew" in Yves.

When an ill-chosen quip can mean torture at the hands of the Gestapo, being the acclaimed Nightingale of Paris might cost Yves his music and his life.

A great and poetic book about survival

Just to make that clear in the beginning: This is really not a "Nazi-romance".

This is a book that happens to take place during WWII - and you can't write about this time without having Nazis in a book. And it's less a romance than a book about surviving during a bleak time in history in Paris and being gay.

Yves isn't a "hero" character, he's afraid, calls himself a coward. He's an opportunist but not always willingly. He starts a "friendship" with Oberst Heinrich von Starck, in the beginning solely based on the fact that it could be useful to have some high ranking German as a "friend". While he actually starts to like Heinrich as a person, he realizes also that these Germans are people, too. But his feelings never go further than mere respect for the person and maybe - if the situation would have been different - friendship. Their sexual relationship is something that happens out of the feeling of obligations from Yves side. He knows he is Heinrich's "mistress" and their sex revolves around Heinrich's needs.
Heinrich von Stark is a conflicted person, groomed to be rank, rooted deeply in his upbringing. He cares for Yves - I don't think he even sees how he is using his position of power to get what he wants from him. He is - deep, deep down - a decent but conflicted person. He tries to do things right, to make things right - in the end...oh wait...spoiler.... ;)
On the other hand - there is Falk, this German soldier whom Yves had saved from assault. Despite being not able to really communicate with each other, they enjoy each others company. Falk comes back again and again. The man is a poet and he falls in love with Yves. He is the opposite to Heinrich - he gives him space and loves him without expecting to be loved back.

So - while there is a romance in this book, in my opinion the main theme is survival, even on the cost of your ideals, your pricipales. A good example is the menue of the Palace, the place where Yves sings. It's changed to German and then later to English...just adjust to survive.

So - once again Aleksandr Voinov created a book with "non-hero" main characters and I couldn't do anything else but love it. The book is full of real atmosphere and honest emotions.
I loved it.

The narrator fits the character - I loved listening to it.