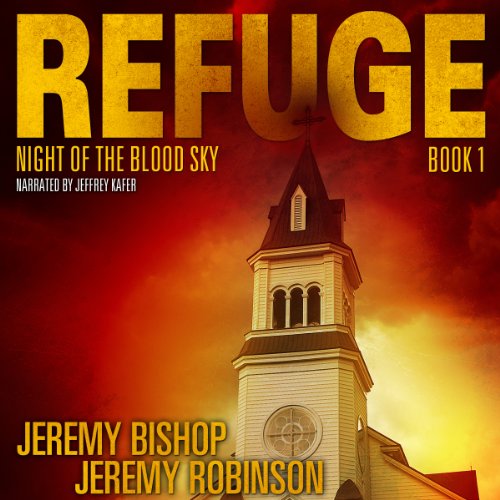 Night of the Blood Sky

Night of the Blood Sky

Rebecca Rule is the sheriff of Refuge, New Hampshire. Her biggest concern is the rowdy summertime revelers making their way up from Massachusetts and New York. With most of the town's residents in neighboring Ashland, for the Fourth of July fireworks show, Refuge is quiet. That is, until the Baptist Church's bell starts ringing - on its own.

The bell chimes faster and faster, reaching a frenetic pace, as though rung by the Devil himself. But the bell is just the beginning. The air shimmers. The night-time sky fills with a burning red aurora. The moon, previously a crescent, is now full. And just hours after dusk, the sun returns to the sky, revealing an endless desert where there was once a mountainous pine forest.

Rule must guide the confused and frightened residents of Refuge through the first terrifying hours of acclimating to this horrifying new environment, while protecting them from inhuman dangers both inside and outside of the town's newly clean-cut borders.

In a world gone haywire, only one thing is certain, no one in Refuge will ever forget the night of the blood sky.