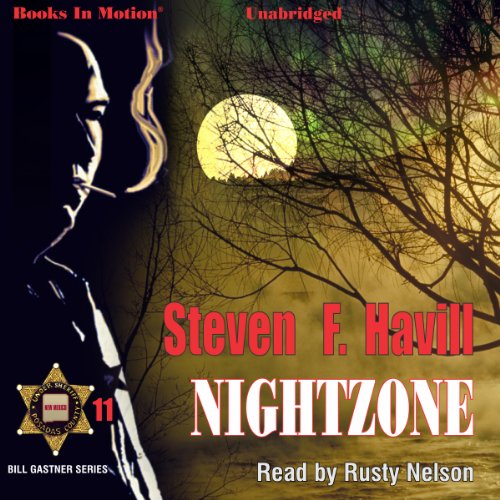 What do you do when you inherit $330 million after taxes? If you're New Mexico rancher Miles Waddell, you build a dream. A flat-topped mesa and a third of a billion dollars equals Nightzone Zone, an astronomy-based theme park, complete with giant radio telescope, a bank of smaller scopes linked to a theater, five-star dining in a restaurant with retracting dome ceiling, a hotel/resort, tram car access, and a narrow gauge steam locomotive to carry tourists to the mesa top. Glorious. And too ambitious for many residents of Posadas County. Waddell's dream begins to sour as one night two eco-terrorists make an opening statement by chain-sawing down power lines that feed the development.

One of the terrorists is killed by a bucking power pole. From 20 miles away, former Posadas Sheriff William K. Gastner spots a pair of headlights as the dead man’s companion speeds from the scene. Charges quickly include murder when the fleeing conspirator is stopped by a cop and guns the lawman down. Hours later a second shooting occurs when Gastner stops to assist Sgt. Jackie Taber during an unrelated traffic stop.

Always the last to pull a trigger, the now 74-year old Gastner becomes the focus of a second investigation by the over-stressed District Attorney and Sheriff’s Department. Meanwhile, Waddell's troubles with rumor-mongers and anti-government thugs continue. A tired Gastner is unwilling to work security for NIGHTZONE, but security has become essential. There is a bright spot: Gastner’s godson, 13 year-old Francisco Guzman.

The musical prodigy’s conservatory has scheduled a double concert in Posadas, part of a national tour. Yet the timing of this stellar event could not be worse with the retired Gastner and the whole community tangling with lethal avengers and agendas.