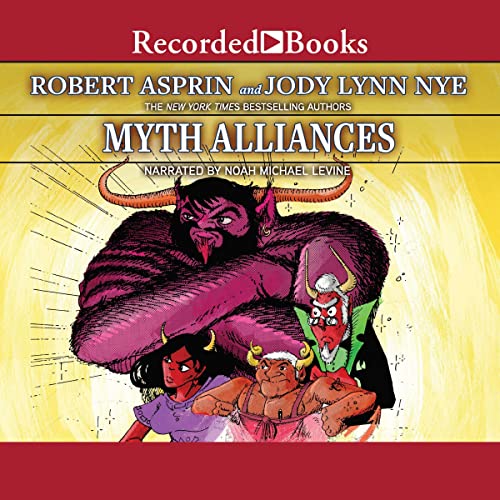 Here it is! The first novel in the brand new Myth Adventures Series by the authors of Liscence Invoked! Robert Asprin teams up with Jody Lynn Nye (Applied Mythology and Advanced Mythology) to bring you a brand new set of Myth Adventures with Skeeve, Aahz, Tanda, and the rest of the gang! Will be followed in 2004 by Myth-Taken Identity.

"You want me to do what?" Aahz gasped, spitting a mouthful of beer clear across the open dance floor. The tuba player gave him a chiding glance and turned his instrument over to empty it. "Ten... Female... PERVECTS!? A dimension full of Wuhses? The Deveels cheated them out of their last dime, and the Pervects got it back for them? And now they want us to throw the Pervects out? Mmm, mmm." He slammed his mug down. I recoiled slightly at the violence of the gesture. His lips twisted. His shoulders started to heave. "Mmm mmm mmm. Ha ha ha ha. Hawhawhawhawhaw! Hawhawhawhawhaw!" He laughed until the building rang with the sound of his voice. The other patrons watched him nervously as he slapped me on the back, stood up, slipped to his knees, and slid down the trestle of the table until he was sitting on the floor laughing. Soon, he recovered and climbed up to his feet again. He took my hand in a crushing grip. "Aw, part-Skeeve," he said, wiping tears from his yellow eyes. "I've missed you, kid. That is one of the best jokes I've heard in months. Really did me good. Fraulein!" He held up a hand and snapped his fingers. "A round for my friends!" "But I'm serious," I stated.