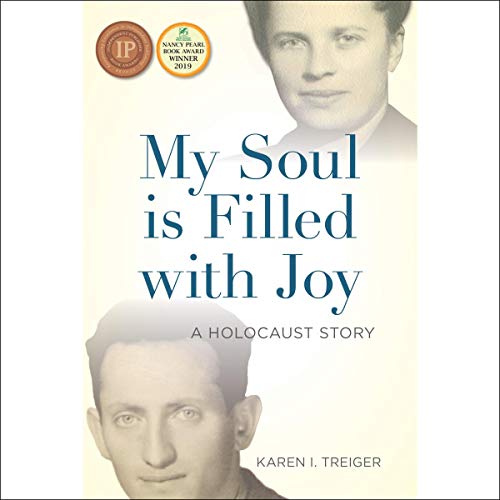 My Soul Is Filled with Joy

WINNER OF BRONZE MEDAL OF INDEPENDENT PUBLISHERS BOOK AWARD (IPPY) IN THE CATEGORY OF WORLD HISTORY!

What do the TV series The Marvelous Mrs. Maisel and My Soul Is Filled with Joy have in common? I'll tell you - Cheryl Stern, the amazing actor who plays the role of Ida (Benjamin's mother) in season two of The Marvelous Mrs. Maisel, and she is voice that expertly narrates My Soul Is Filled with Joy. Ms. Stern brings a rich background of acting and narration to bear on her storytelling. The audiobook's depth and meaning come to life with her voice.

The audiobook tells the story of Sam and Esther Goldberg who met in the Polish forest - just outside of the Treblinka Death Camp. It was August 3, 1943, just one day after Sam escaped the camp during a prisoner uprising. With 870,000 murdered at Treblinka, Sam was one of approximately 65 to survive and live until the end of the war. Esther had been hiding in that patch of forest for a year. They met, and after hearing of the prisoner revolt, she took him to the Righteous Gentiles who, at great danger to themselves, hid them in their barn for three days while the Nazis, Ukrainians, and Poles scoured the area looking for escapees.

Deciding to stay and hide with Esther, they dug a forest pit where they "lived" when it was not freezing. They subsisted in the pit and the barns - hungry, cold, and scared - for another year until they were liberated by the Red Army in July of 1944. This is only one piece of their harrowing story of survival.

This audiobook tells the story of Sam and Esther, Holocaust survivors who lost their entire families because of Hitler's Final Solution.

The author, Karen Treiger, is Sam and Esther's daughter-in-law. She and her family traveled to Poland to walk in Sam and Esther's footsteps and to meet the children of the Righteous Gentiles that helped them survive. It was an intensely emotional experience for both families. Also, with the help of a Polish priest, she was able to locate and meet a Goldberg cousin they never knew they had.

My Soul Is Filled with Joy: A Holocaust Story brings to life the horror of the Nazis' actions and the toll it exacted on so many Jewish families. This is also a story of hope, love, and determination; of a family rediscovering the path taken by their parents to find life and freedom in a new world. Sam and Esther's story is one of love and the will to live no matter what they had to endure. It reminds us that we are still learning the lessons of the Holocaust.

Tributes for My Soul Is Filled with Joy:

"It is vital that this book - as well as other accounts of the Holocaust - be preserved and disseminated widely to future generations to help prevent anything similar from ever happening again." (Marion Blumenthal Lazan, Holocaust survivor and coauthor of Four Perfect Pebbles)

"This book which started as a gift of love from the author to her survivor parents-in-law, turns out to be a gift of seeing life anew to every reader. It enables us - no, it compels us-to see our everyday lives in a new dimension of appreciation, meaning and purpose. I urge everyone to look deeply into this book and accept its priceless gift of a new life." (Rabbi Yitz Greenberg, president emeritus, CLAL: The National Jewish Center for Learning and Leadership; chairman, the United States Holocaust Memorial Council, 2000-2002.)

"In Karen Treiger's important book she tells the story of her in-laws. Their suitcases were filled with only tragic and bitter memories. Yet, they had the courage to pick themselves up by the bootstraps, wipe away the tears, turn despair into hope, and rebuild Jewish life." (Rabbi Marvin Hier, founder and dean, Simon Wiesenthal Center)

"Karen has written a powerful and personal account of Sam and Esther Goldberg. This book is a must read for those interested in the greatest crime in the history of mankind." (Chris Webb, author/historian, founder of the Holocaust Historical Society)