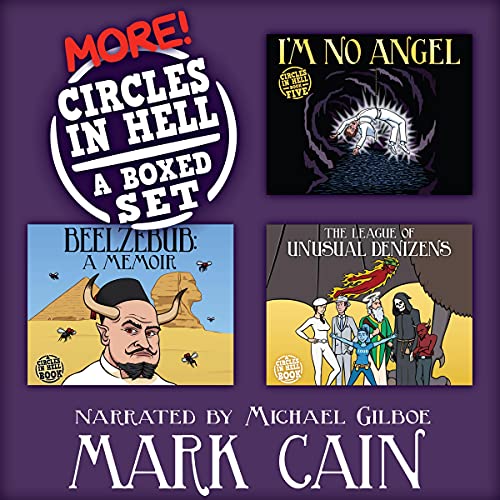 The next three novels in the Circles in Hell universe. A great binge listen!

Fans who have enjoyed the first four novels in the series have questions, such as, "What would Steve do next?" "How did it all begin?" and "What the heck is a dweebil?" More Circles in Hell: A Boxed Set has the answers as well as more than a few laughs.

I'm No Angel picks up where The Reluctant Demon leaves off. Find out what's in store for our reluctant hero as he squares off against Satan, makes new friends, and gets a new suit.

Beelzebub: A Memoir is the ultimate back story. Fourteen billion years in the making, Beezy's tale is one of chaos, creation, and of course comedy. Learn about the devils' time on Earth. Meet the movers and shaker of biblical history. Drink beer with everyone's favorite devil in a tavern in Toledo (not Ohio). Oh, and learn the origin story of BOOH, the fabled Bat Out of Hell.

In The League of Unusual Denizens, seven inhabitants of hell (and one ringer from heaven) join forces to save the universe from destruction. Travel with them through the realm of chaos, "without form and void" (sort of). Eat at the captain's table on your voyage into the infinite. Meet some gods, make new friends. Get drunk with giants, dwarves, and a wolf. Bet on a race between two of the fastest critters in the universe.

Circles in Hell has been variously described as satire and humor, comedy fantasy or paranormal humor in the spirit of Christopher Moore, Tom Holt, Douglas Adams, and Gary Larson. The series takes the everyday frustrations of modern life and expands them to Hellish proportions. You never know who you will run into in Cain's cracked Inferno. You might encounter a great inventor, a movie star, a mythological being, a very large bat and, of course, more than the occasional devil and demon.