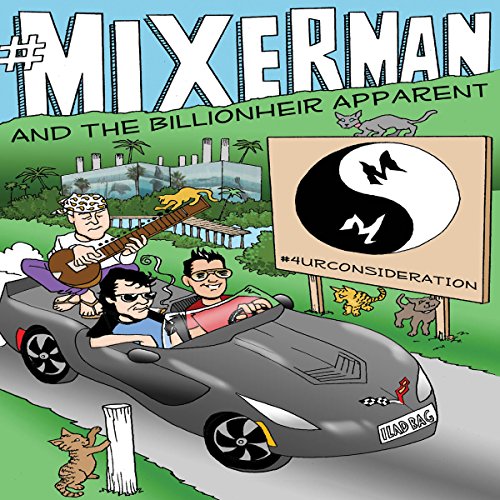 Mixerman and the Billionheir Apparent

After years of diminishing income due to cratering sales in the music business, Mixerman accepts a timely and lucrative offer from an Indian billionaire to mentor his son, Kanish Kanish. Mixerman's mission? To teach the young "billionheir" everything he knows about producing records. But it isn't long before they're teaching each other about life in general. After an initial carefree romp through California inspires a catchy ditty, the two partner up to produce the song and then break it on the Internet in an effort to get radio spins. There's just one problem. Mixerman's peers figure out how to import their own billionheirs, and before long things escalate into a race for the crown jewel of the music business: a big fat label deal with a major distributor. As in The Daily Adventures of Mixerman, his first book, Mixerman employs his sharp wit and a colorful cast of characters to take us on another wild adventure. In the process, he manages to expose the dark underbelly of today's music business in a way that even the music fan can understand. And it ain't pretty.

When the first audiobook by Mixerman was about the madness of mixing pro in a studio, this 2nd episode is about the music biz and the insanity of how it operates behind the curtains. For me, I liked the first book much better. This one started out surprisingly interesting but closer to the end I was missing some insight gems from an/ this established engineer. The story is ok but I could have lived without it. No new insights for me, just some entertainment insanity. To the end the story becomes quite absurd before at the same time then starting to criticize the current system run by big tech in a reasonable and clever way. Which both I liked again though. So it has its Ups and downs and a better ending than his first book. And generally good job in recording and style. Looking fwd to a 3rd book.