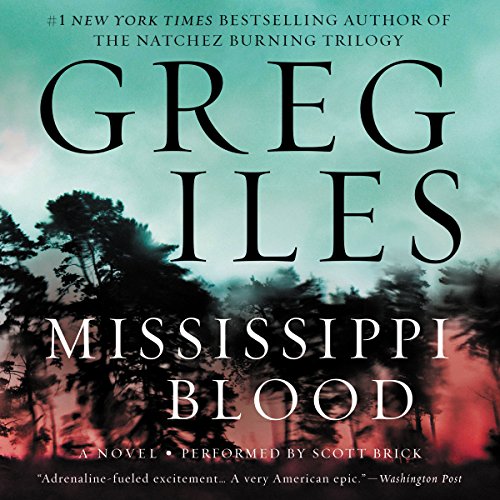 The endgame is at hand for Penn Cage, his family, and the enemies bent on destroying them in this revelatory volume in the epic trilogy set in modern-day Natchez, Mississippi - Greg Iles' epic tale of love and honor, hatred and revenge that explores how the sins of the past continue to haunt the present.

Shattered by grief and dreaming of vengeance, Penn Cage sees his family and his world collapsing around him. The woman he loves is gone, his principles have been irrevocably compromised, and his father, once a paragon of the community that Penn leads as mayor, is about to be tried for the murder of a former lover. Most terrifying of all, Dr. Cage seems bent on self-destruction. Despite Penn's experience as a prosecutor in major murder trials, his father has frozen him out of the trial preparations - preferring to risk dying in prison to revealing the truth of the crime to his son.

During 40 years practicing medicine, Tom Cage made himself the most respected and beloved physician in Natchez, Mississippi. But this revered Southern figure has secrets known only to himself and a handful of others. Among them, Tom has a second son, the product of a 1960s affair with his devoted African American nurse, Viola Turner. It is Viola who has been murdered, and her bitter son - Penn's half brother - who sets in motion the murder case against his father. The resulting investigation exhumes dangerous ghosts from Mississippi's violent past. In some way that Penn cannot fathom, Viola Turner was a nexus point between his father and the Double Eagles, a savage splinter cell of the KKK. More troubling still, the long-buried secrets shared by Dr. Cage and the former Klansmen may hold the key to the most devastating assassinations of the 1960s. The surviving Double Eagles will stop at nothing to keep their past crimes buried, and with the help of some of the most influential men in the state, they seek to ensure that Dr. Cage either takes the fall for them or takes his secrets to an early grave.

Tom Cage's murder trial sets a terrible clock in motion, and unless Penn can pierce the veil of the past and exonerate his father, his family will be destroyed. Unable to trust anyone around him - not even his own mother - Penn joins forces with Serenity Butler, a famous young Black author who has come to Natchez to write about his father's case. Together Penn and Serenity - a former soldier - battle to crack the Double Eagles and discover the secret history of the Cage family and the South itself, a desperate move that risks the only thing they have left to gamble: their lives.

Mississippi Blood is the enthralling conclusion to a breathtaking trilogy seven years in the making - one that has kept listeners on the edges of their seats.

"It takes gravitas and a quiet dignity to capture the people caught in a racial maelstrom in this concluding volume of Iles's atmospheric trilogy. Narrator Scott Brick lends both these qualities to this audiobook's central characters... Thanks to Brick's stellar narration, this lengthy production never drags, and listeners will want to visit Penn's Natchez again as a result." ( AudioFile)

Worthy final of a unique trilogy

I was looking forward excitedly to the third volume of this epic narration a year ago. I couldn't wait to get my personal copy to finally know how all the drama will end. So many single destinies entangled in a story of high complexity but always fun to read. No character left me untouched and I really started to feel with Penn Cage, being urged to interfere when he or someone of his friends or family were in danger. As Penn is a credible and vulnerable character - on the one hand straight but in the next moment doubting himself in his thoughts about right or wrong. Simply human and that is why I like the trilogy. It is never about a classic hero but a guy who exceeded himself because circumstances of all that happens to him force him to act that way. And while I was listening to all three books I often asked myself how probably I would have reacted. It is close to life and that's why the story works.

The thread of the last two volumes is continued fluently and quickly starts with the accusations against Penns father of having murdered his former nurse Viola Turner who came back to Natchez after more than 40 years of absence in order do die in dignity at her place of birth. Her return draws the attention of the Double Eagles to her - a former slinter group of the KKK who fear that she will reveal some old secrets that should never come to the surface. Before she passes away she meets Penns father Dr. Tom Cage. They keep a common secret that is tied to the Double Eagles and reveals the truth of what has happened in the former 60 ties when racial segregation was at its peak. This circumstance is the core of all the epic books. And we need some endurance to learn the real reasons why Viola fled from Natchez, but came back and for what reason.

Penn Cage tries to figure out in all the narrations what secret is hidden from him by his father. For this he starts to investigate and come after a lot of dangerous truths that bring him and his family in serious trouble and beyond.

What I really like is the capability of Mr. Iles that he creates a story that could be definitely true and portrays against the background of more than four decades of racial history. In contrast to the first two volumes the third book for me was more a kind of intimate play. A big part of the book takes place in court and shows the trial against Dr. Tom Cage who is charged with murder to Viola Turner. This was sometimes a kind of challenge for me due to the fact that English is not my native language and so the legal details and long conversations episodes claimed my patience. But at the end I am glad that I stuck to the book and know that these three epic tales really stand out in comparison to a lot of audio books I have listend to so far.

Scott Brick as the narrator carries you through the story in a very positive way. He speaks clearly so I could easily follow the narration and he gives different characters an own personality thanks to his variety of his voice.