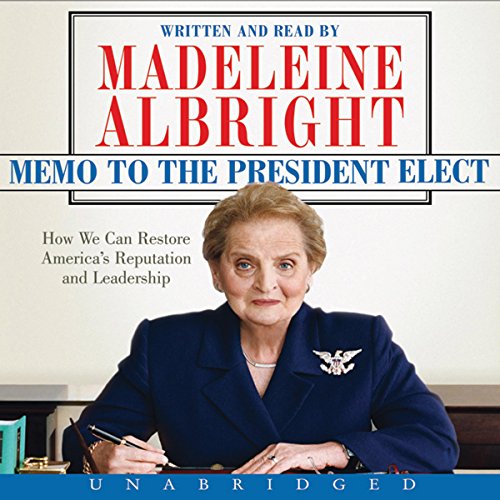 Memo to the President Elect

Memo to the President Elect

The next president, whether Democrat or Republican, will face the daunting task of repairing America's core relationships and tarnished credibility after the damage caused during the past seven years. In Memo to the President Elect, former secretary of state and best-selling author Madeleine Albright offers provocative ideas about how to confront the striking array of challenges that the next commander-in-chief will face and how to return America to its rightful role as a source of inspiration across the globe.

Much more than a set of policy prescriptions, Secretary Albright's writing blends lessons from the past with forward-looking suggestions about how to assemble a first-rate foreign policy team, anticipate the actions of other key countries, make full use of presidential power without repeating the excesses of the Bush administration, and revive America's commitment to its founding ideals.

Albright's advice is candid, as conveyed in a confidential memo, and seasoned with humor and stories from her years in office. Drawing on her extensive experience as an advisor to two presidents and a key figure in four presidential transitions, she provides an insider's analysis of U.S. options in addressing the decisive issues of our era: terrorism, wars in Iraq and Afghanistan, rivalries in the Middle East, the potential for nuclear war, and headaches created by such troublesome leaders as Iran's Mahmoud Ahmadinejad, Russia's Vladimir Putin, Venezuela's Hugo Chavez, and North Korea's Kim Jong-il.

The 2008 election promises to be one of the most dramatic in our nation's history. Memo to the President Elect offers indispensable guidance for the next occupant of the White House: and a wealth of insights for voters to think about before deciding who that person will be.