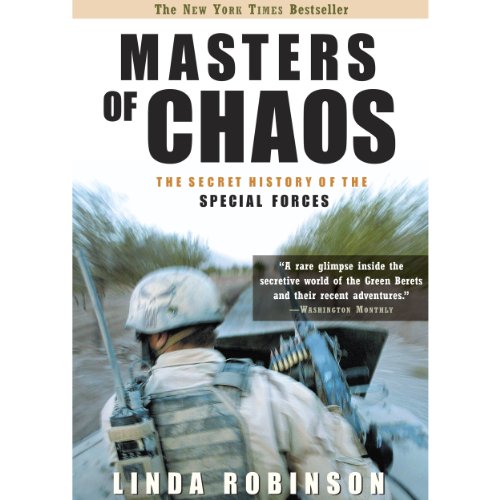 Special Forces soldiers are daring, seasoned troops from America's heartland, selected in a tough competition and trained in an extraordinary range of skills. They know foreign languages and cultures and unconventional warfare better than any US fighters, and while they prefer to stay out of the limelight, veteran war correspondent Linda Robinson gained access to their closed world. She traveled with them on the frontlines, interviewed them at length on their home bases, and studied their doctrine, methods, and history. In Masters of Chaos she tells their story through a select group of senior sergeants and field-grade officers, a band of unforgettable characters like Rawhide, Killer, Michael T, and Alan - led by the unflappable Lt. Col. Chris Conner and Col. Charlie Cleveland, a brilliant but self-effacing West Pointer who led the largest unconventional war campaign since Vietnam in northern Iraq.

Robinson follows the Special Forces from their first post-Vietnam combat in Panama, El Salvador, Desert Storm, Somalia, and the Balkans to their recent trials and triumphs in Afghanistan and Iraq. She witnessed their secret sleuthing and unsung successes in southern Iraq and recounts here for the first time the dramatic firefights of the western desert. Her blow-by-blow story of the attack on Ansar al-Islam's international terrorist training camp has never been told before.

The most comprehensive account ever of the modern-day Special Forces in action, Masters of Chaos is filled with riveting, intimate detail in the words of a close-knit band of soldiers who have done it all.