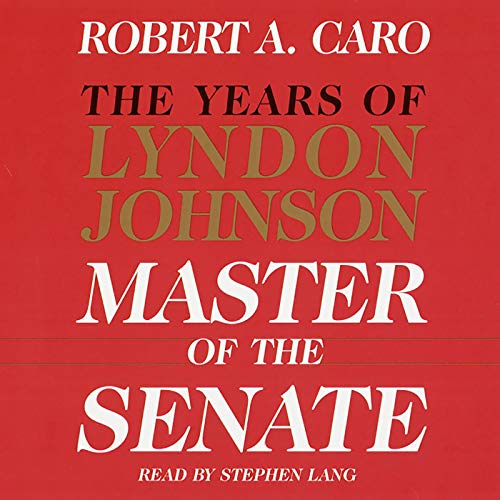 Master of the Senate

Master of the Senate is an exhaustive yet thoroughly enjoyable account of Lyndon B Johnson's years in the senate (1949 - 1961). During that time, Johnson restored power to the title of Senate Majority Leader (no easy feat!) and used his extraordinary political prowess to ensure passage of the 1957 Civil Rights Act. This book is must for anyone who loves the human drama of politics and power. (Kerry, Producer of Original Programming)

Master of the Senate carries Lyndon Johnson's story through one of its most remarkable periods: his 12 years, from 1949 to 1960, in the United States Senate. At the heart of the book is its unprecedented revelation of how legislative power works in America, how the Senate works, and how Johnson, in his ascent to the presidency, mastered the Senate as no political leader before him had ever done.

Caro demonstrates how Johnson's political genius enabled him to reconcile the unreconcilable: to retain the support of the southerners who controlled the Senate while earning the trust - or at least the cooperation - of the liberals, led by Paul Douglas and Hubert Humphrey, without whom he could not achieve his goal of winning the presidency. And we hear him achieve the impossible: convincing southerners that although he was firmly in their camp as the anointed successor to their leader, Richard Russell, it was essential that they allow him to make some progress toward civil rights.

Robert A. Caro has won the Pulitzer Prize for Biography, as well as two National Book Critics Circle Awards and other honors. Master of the Senate is told with an abundance of rich detail that could only have come from Caro's peerless research.

“A wonderful, a glorious tale.... It will be hard to equal this amazing book. It reads like a Trollope novel, but not even Trollope explored the ambitions and the gullibilities of men as deliciously as Robert Caro does. Even though I knew what the outcome of a particular episode would be, I followed Caro’s account of it with excitement. I went back over chapters to make sure I had not missed a word.... Caro’s description of how [Johnson passed the civil rights legislation] is masterly; I was there and followed the course of the legislation closely, but I did not know the half of it.” (Anthony Lewis, The New York Times Book Review)

“A masterpiece.... Robert Caro has written one of the truly great political biographies of the modern age.” (Daniel Finkelstein, The Times, London)

“Mesmerizing.... [It] brings LBJ blazing into the Senate.... A tale rife with drama and hypnotic in the telling. The historian’s equivalent of a Mahler symphony.” (Malcolm Jones, Newsweek)