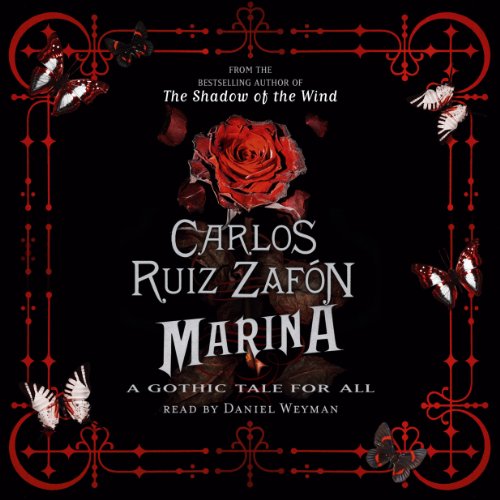 The novel Carlos Ruiz Zafón wrote just before The Shadow of the Wind.

'Fifteen years on, the remembrance of that day has returned to me. I have seen that boy wandering through the mist of the railway station, and the name of Marina has flared up again like a fresh wound. We all have a secret buried under lock and key in the attic of our soul. This is mine...'

In May 1980, 15-year-old Oscar Drai suddenly vanishes from his boarding school in the old quarter of Barcelona. For seven days and nights no one knows his whereabouts... His story begins in the heart of old Barcelona, when he meets Marina and her father German Blau, a portrait painter. Marina takes Oscar to a cemetery to watch a macabre ritual that occurs on the fourth Sunday of each month. At 10 a.m. precisely a coach pulled by black horses appears. From it descends a woman dressed in black, her face shrouded, wearing gloves, holding a single rose. She walks over to a gravestone that bears no name, only the mysterious emblem of a black butterfly with open wings. When Oscar and Marina decide to follow her they begin a journey that will take them to the heights of a forgotten, post-war Barcelona, a world of aristocrats and actresses, inventors and tycoons; and a dark secret that lies waiting in the mysterious labyrinth beneath the city streets.

Read by Daniel Weyman. Daniel Weyman has had a varied film, TV, radio and theatrical career, appearing in Danny Boyle's Millions, Foyles War, Wire in the Blood, Nicholas Nickleby for the Chichester Festival Theatre and Gielgud Theatre, in which he played the title role, and was nominated for the TMA Best Actor Award (Chichester Festival Theatre, Gielgud Theatre, UK Tour and Toronto) and radio productions of Rumpole of the Bailey.

He is an experienced audiobook narrator, with titles including Peter James' Dead Man's Time, C J Sansom's Dominion, Joe Simpson's Touching the Void, Nick Harkaway's Angelmaker, Andrew Lane's Young Sherlock: Rebel Fire and Simon Kernick's Payback both of which were nominated for Best Audiobook of the Year in their categories.