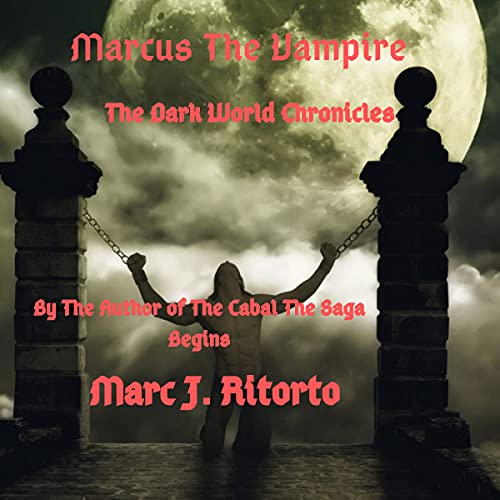 Marcus was a happy family man until Hitler's reign of tyranny came. He was captured and tortured in a Nazi camp. It was his grandmother's magic that saved him from death by turning him into a vampire. He now struggles with the loss of his wife and keeping his daughter safe not only from Nazis, but from the creatures that live in the realm of the Dark World, including vampires, werewolves, and witches. How will Marcus protect his daughter from the dangers of the Dark World? Listen to the novel and find out. This book is great for anyone who loves vampire fantasy novels.

This book was written by Marc J. Ritorto, the same author of the action thriller suspense novel The Cabal The Saga Begins. In the same spirit of his first, this vampire fantasy novel will keep its listeners on the edge of their seats with the amount of action and suspense contained in this novel.

This book is not your typical vampire horror story. This book gives the complete origin story of how Marcus goes from simple family man to vampire. It gives an accurate historical account of what happened in Germany under Hitler's reign. It's about the struggles of Hitler's victims. It's about the friendships Marcus makes along his journey and about his love for his family and his relentless quest to protect his daughter and exact revenge on anyone who stands in his way.

Marcus the Vampire is a vampire fantasy/horror/suspense thriller novel that stands on its own and should be considered the best vampire story ever told.