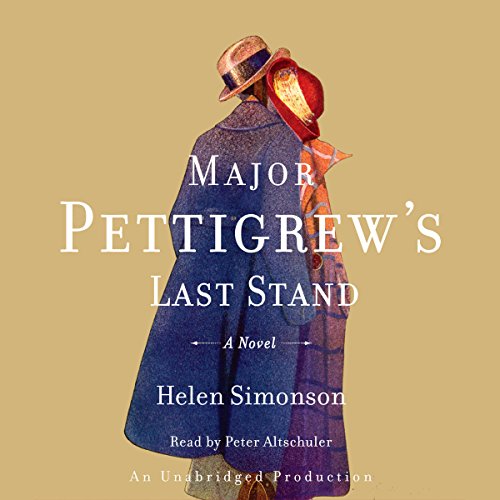 Major Pettigrew’s Last Stand, author Helen Simonson’s wry, perceptive debut novel about love, the British class system, and family obligations, genially unfolds amid a quaint, leafy English village, tweedy and provincial as any Miss Marple mystery, drafty vicarage and all. Edgecombe St. Mary is home to retired widower Major Ernest Pettigrew, a courtly, roguish martinet whose predictable daily order cracks when he loses his heart to Mrs. Ali, a genteel local Pakistani shopkeeper with “crisp enunciation”, who shares both his devotion to Kipling and the loss of a cherished spouse.

As narrated by Peter Altschuler, 68-year-old Major Pettigrew is a snippy educated snob with a posh accent and sentimental streak. Altschuler inhabits the Major as a man who telegraphs disappointment in Roger, his drippy banker son, through throat-clearings and stutters. But it’s his reading of complicated Mrs. Ali that truly elevates this book. Altschuler articulates her quiet, ruminating spirit and cautious nature by slowing down his own conversational flow. There is deliberateness and intimacy to Mrs. Ali reflected in her low, melodious speech and tinkling laughter. Her insecurities and droll humor sand down the Major’s prickliness and humanize his peevishness. Mrs. Ali, it turns out, is as funny and flawed as the rest of us.

Major Pettigrew’s Last Stand is wistful and rolling, only gradually revealing the origins of blemishes in one’s family life. Roger’s social climbing, hinted at by Altschuler through his slick use of his father, gives way to a more nuanced explanation of the son’s ambition. And when the Major compares Mrs. Ali to other village dames, noting that she’s “a butterfly to their scuffle of pigeons”, you get the sense that Major Pettigrew, crusty, old soul, is meant to bust out flowery paeans to Mrs. Ali, off-key, certainly, but authentic, nonetheless. Nita Rao

You are about to travel to Edgecombe St. Mary, a small village in the English countryside filled with rolling hills, thatched cottages, and a cast of characters both hilariously original and as familiar as the members of your own family. Among them is Major Ernest Pettigrew (retired), the unlikely hero of Helen Simonson's wondrous debut. Wry, courtly, opinionated, and completely endearing, Major Pettigrew is one of the most indelible characters in contemporary fiction, and from the very first page of this remarkable novel he will steal your heart.

The Major leads a quiet life valuing the proper things that Englishmen have lived by for generations: Honor, duty, decorum, and a properly brewed cup of tea. But then his brother's death sparks an unexpected friendship with Mrs. Jasmina Ali, the Pakistani shopkeeper from the village. Drawn together by their shared love of literature and the loss of their respective spouses, the Major and Mrs. Ali soon find their friendship blossoming into something more. But village society insists on embracing him as the quintessential local and her as the permanent foreigner. Can their relationship survive the risks one takes when pursuing happiness in the face of culture and tradition?