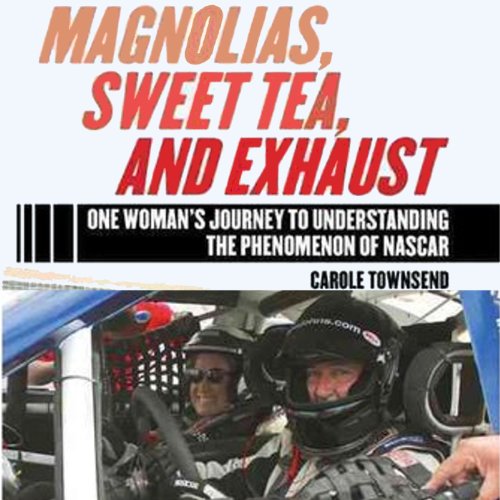 In Magnolias, Sweet Tea, and Exhaust, Carole Townsend goes to ground with NASCAR, following the races at Southern tracks from one to the next, learning about the sport and the culture of NASCAR as she goes. Townsend meets and interviews top drivers as well as some of NASCAR’s rising stars, legends, team owners, pit crews, and fans. In a display of immersion journalism at its best, Townsend takes a ride in one of the cars on a track at race speed, tours the multimillion dollar garages in North Carolina, learns from mechanics, mingles with fans, and participates in the much-coveted infield camping party at Atlanta Motor Speedway. Gaining behind-the-scenes access at races, she experiences up close the dedication, competition, and precision of NASCAR teams during qualifying trials and races.Some of the interviews and viewpoints included in the book are 2013 NASCAR Hall of Fame nominee Rex White (the 1960 NASCAR Grand National Champion), David Ragan (winner of the 2013 Talladega May race) and his pit crew chief Jay Guy, top contender Clint Bowyer, and driver Johanna Long, the 20-year-old Nationwide Series phenomenon. Team owner Michael Waltrip and 16-year-old rising star Mason Massey also talk with Townsend about the sport’s popularity, its changing face, and today’s challenges. Townsend also covers NASCAR and its good old boy” roots in bootlegging, as well as Southern food and hospitality as represented by that great traditiontailgating (a sport in itself). She also discusses the fascinating evolution of NASCAR racing rules and the growing popularity of NASCAR abroad.This is a perfect book for the avid NASCAR fan as well as the more casual fan looking to learn more about this growing phenomenon!