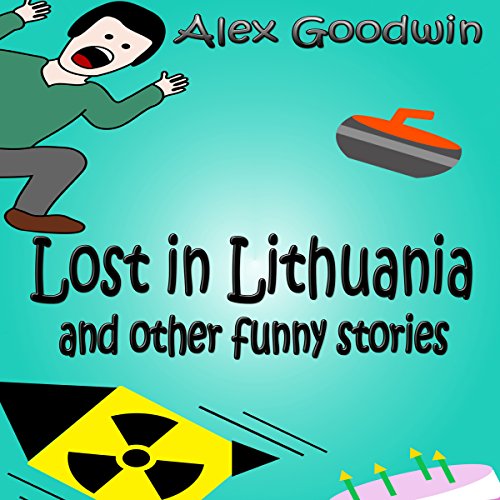 A funny exploration of the twin mysteries that are Bob and Billy, masterfully presented by Alex Goodwin, the non-Pulitzer Prize winner and non-New York Times–bestselling author of the Bob and Billy Funny Stories series.

In his previous book, Problem Cousin and Other Funny Stories, Alex Goodwin embarked on the exploration of lives of Bob and Billy as they attempted to find pickled goats’ feet, colluded with witches that control bananas, hosted their slightly problematic cousin, and even chased a burning Christmas tree up and down the mountain (mostly down, as gravity of the situation would have it). And all of it was done to hilarious results.

In Lost in Lithuania and Other Funny Stories, an uproarious, brand-new collection, Alex Goodwin tackles everything from curling tournaments to high-stress bakery jobs to incredibly inventive (in the wrong way!) midnight tours of Igor’s castle to the hardship of aglet manufacturing to the satisfaction of homecoming (even if that home happens to be a bomb-testing field in the Death Valley).

Let’s face it: Bob and Billy are back, and they are funnier than ever. What are you waiting for? Get on your unicycle and pedal through this book! As Bob and Billy would put it, don’t be a wild Hungarian moose baby about it and read this new non-masterpiece.