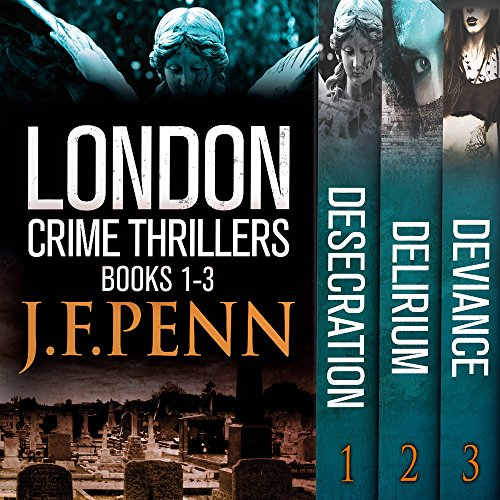 Evil stalks the city of London at night. Can Detective Jamie Brooke and reluctant psychic Blake Daniel stop the murders before it's too late?

This audiobook contains three full-length crime thrillers with an edge of the supernatural from J.F. Penn.

Desecration. When the body of a young heiress is found within the Royal College of Surgeons, Detective Sergeant Jamie Brooke is assigned to the case. An antique ivory figurine found beside the body is the only lead and she enlists Blake Daniel, a reluctant psychic, to help her discover the message it holds.

Delirium. When a prominent psychiatrist is found murdered in the old hospital of Bedlam, Detective Sergeant Jamie Brooke finds herself investigating the history of madness to fathom the motive. Blake Daniel, a reluctant psychic, helps her to research the case, only to discover that his own family are entwined with the shadowy forces that seek to control the minds of the mad.

Deviance. When the body of a priest is found in the ruins of Winchester Palace, his tattooed arms flayed, his mouth stuffed with feathers, the artists and outcasts of Southwark huddle in fear. Private investigator Jamie Brooke begins the hunt for the murderer aided by Blake Daniel, a psychic researcher, who is haunted by visions of the past. As violence erupts, leaving a trail of bodies in its wake, Jamie and Blake must find the skin collector before those they love are taken down.