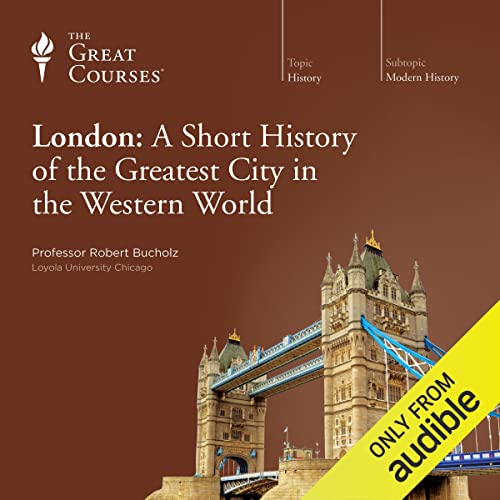 London: A Short History of the Greatest City in the Western World

No city has had as powerful and as enduring an impact on Western civilization as London. But what made the city the perfect environment for so many great developments? How did London endure the sweeping historical revolutions and disasters without crumbling? Find the answers to these questions and more in these 24 fascinating lectures.

Professor Bucholz takes you through the history of this magnificent metropolis, from its birth as an ancient Roman outpost to its current status as a global village. You'll study the many epic chapters in British and world history - including the English Renaissance, the turmoil of the English civil war, and the epic conflicts of World Wars I and II - through the lens of this amazing capital.

What makes the course unique is that it takes you deep into the streets of London during formative periods in its history. Professor Bucholz continuously emphasizes the importance of understanding and experiencing the sights and sounds of London as it was lived by its residents. You'll come to know what daily life was like in historical London, learning the secret histories behind places such as Westminster Abbey, Piccadilly Circus, and London Bridge.

This unforgettable look at an unforgettable city will undoubtedly delight and surprise you. By the final lecture, you'll come to realize just what Samuel Johnson meant when he famously declared, "there is in London, all that life can afford."