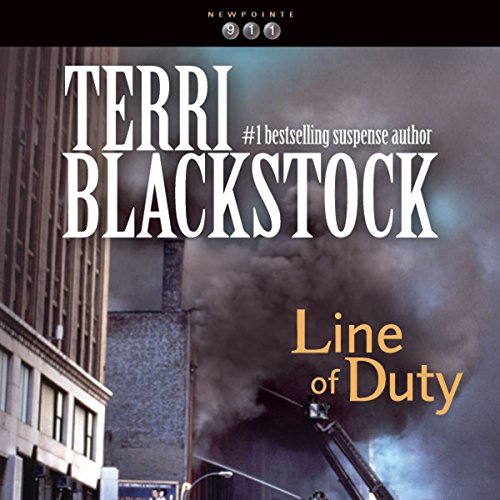 At the request of her many fans—Terri Blackstock revisits the heroic cast of characters in this fifth book in her best-selling Newpointe 911 series.

In Line of Duty, a bomb explodes at the Icon International building in New Orleans while lawyer Jill Clark Nichols is in the top floor boardroom. The 30-story building goes up in flames, and fire departments from all around the area are called in. The firefighters from Newpointe are especially concerned, since they know Jill is inside the building. Dan, her husband, rushes in to save her. But as firefighters work to evacuate the upper floors of the building, a second and third bomb explode, causing the lower floors to cave in. Firefighters and civilians are buried beneath the rubble.

One firefighter is unaccounted for - was he really buried, or did he take the opportunity to flee from the problems in his life?

When the smoke finally clears, a count is taken. Jill narrowly escapes the chaos of the explosions and fire only to find Dan missing. Were the bombs the act of a terrorist, or a scheme coming from a heart of greed? Can Jill’s faith carry her through these long days of pain and uncertainty? And will Dan survive this tragedy . . . or sacrifice his life in the line of duty?
Dial up another mystery in the Newpointe 911 series.
©2003 Terri Blackstock (P)2008 Zondervan