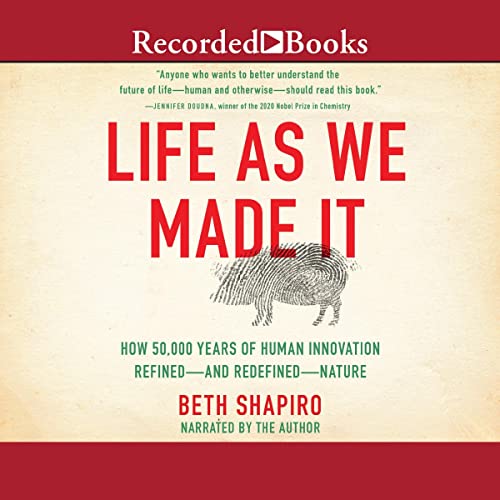 Life as We Made It

In 2020, the inventors of CRISPR, the revolutionary gene-editing tool, won the Nobel Prize for medicine. It seemed like the capstone of an astounding 50-year run: We have turned bacteria into factories for insulin, used viruses to insert genes for pesticide resistance into plants, and now learned to rewrite our own DNA.

Once, we humans could only observe evolution. Suddenly, we had conquered it. And yet, in Life as We Made It, evolutionary biologist Beth Shapiro argues that - despite how amazing our new technologies are - our ability to alter the course of evolution isn’t new. Humans have been reshaping the world around us for ages, from the first dogs to genetically modified Enviropigs. Indeed, she argues, resetting the course of evolution is what our species does, by domesticating, as with dogs and wheat; by hunting, as with wolves and mammoths; and by protecting, as with bison and mountain lions.

What is new is that where once we shaped evolution through brute force, we can now do it as artisans. That power comes not a moment too soon. If we are going to survive in the next few centuries, we must revise the book of life. Instead of rehashing arguments about genetic engineering, let’s embrace the fact that we can shape evolution to create a world in which we want to live. The question isn’t should we meddle, but how? Life as We Made It is an essential book for charting a better course into a risky future.

Das sagen andere Hörer zu Life as We Made It