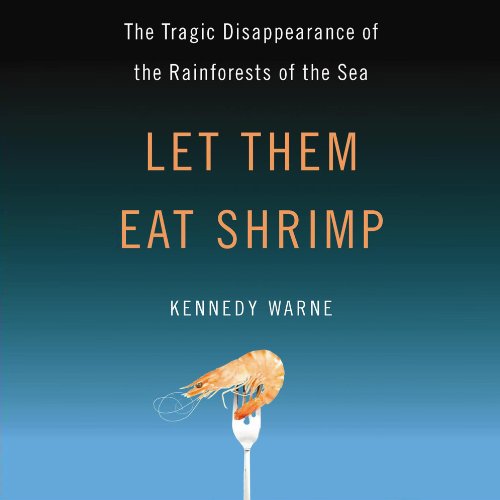 This audiobook begins at a shrimp dinner and ends as an essential environmental manifesto. Journalist Kennedy Warne investigates the links between shrimp farming and the degradation of mangroves. He takes a look at shrimp harvesting across continents, explaining how governments do or do not protect mangroves in those regions.

Like Barry Estrabrook's Tomatoland, this audio focuses on one element of our food system in order to illuminate broader environmental, social, and political problems of today's global economy. The audio raises consciousness about what and how we eat - it forces us to face where our food comes from, and how.  Kevin Young is the perfect narrator for the occasion - low, authoritative, patient - it's like getting your favorite public radio host to talk for seven hours straight.

What's the connection between a platter of jumbo shrimp at your local restaurant and murdered fishermen in Honduras, impoverished women in Ecuador, and disastrous hurricanes along America's Gulf coast? Mangroves. Many people have never heard of these salt-water forests, but for those who depend on their riches, mangroves are indispensable. They are natural storm barriers, home to innumerable exotic creatures - from crab eating vipers to man-eating tigers - and provide food and livelihoods to millions of coastal dwellers. Now they are being destroyed to make way for shrimp farming and other coastal development. For those who stand in the way of these industries, the consequences can be deadly.

In Let Them Eat Shrimp, Kennedy Warne takes listeners into the muddy battle zone that is the mangrove forest. A tangle of snaking roots and twisted trunks, mangroves are often dismissed as foul wastelands. In fact, they are supermarkets of the sea, providing shellfish, crabs, honey, timber, and charcoal to coastal communities from Florida to South America to New Zealand. Generations have built their lives around mangroves and consider these swamps sacred.

To shrimp farmers and land developers, mangroves simply represent a good investment. The tidal land on which they stand often has no title, so with a nod and wink from a compliant official, it can be turned from a public resource to a private possession. The forests are bulldozed, their traditional users dispossessed.

The true price of shrimp farming and other coastal development has gone largely unheralded in the U.S. media. A longtime journalist, Warne now captures the insatiability of these industries and the magic of the mangroves. His vivid account will make every listener pause before ordering the shrimp.