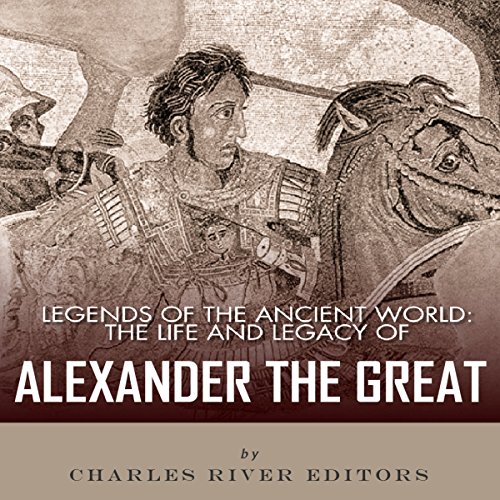 Legends of the Ancient World: The Life and Legacy of Alexander the Great

"There is nothing impossible to him that will but try" (Alexander)

A lot of ink has been spilled covering the lives of history's most influential figures, but how much of the forest is lost for the trees? In Charles River Editors' Legends of the Ancient World series, listeners can get caught up to speed on the lives of antiquity's most important men and women in the time it takes to finish a commute, while learning interesting facts long forgotten or never known.

Over the last 2,000 years, ambitious men have dreamed of forging vast empires and attaining eternal glory in battle, but of all the conquerors who took steps toward such dreams, none were ever as successful as antiquity's first great conqueror. Leaders of the 20th century hoped to rival Napoleon's accomplishments, Napoleon aimed to emulate the accomplishments of Julius Caesar, but Caesar found inspiration in Alexander the Great (356-323 B.C.), the Macedonian King who managed to stretch an empire from Greece to Asia's Himalayas at just 30 years old. It took less than 15 years for Alexander to conquer much of the known world.

As fate would have it, Alexander died of still-unknown causes at the height of his conquests, when he was still in his early 30s. Although his empire was quickly divided, his legacy only grew, and Alexander became the stuff of legends even in his own time. Alexander was responsible for establishing 20 cities in his name across the world, most notably Alexandria in Egypt, and he was directly responsible for spreading ancient Greek culture as far east as modern-day India and other parts of Asia.

Das sagen andere Hörer zu Legends of the Ancient World: The Life and Legacy of Alexander the Great