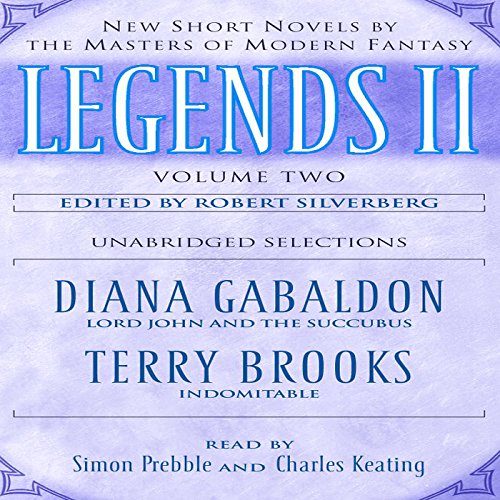 Fantasy fans rejoice! Seven years after writer and editor Robert Silverberg made publishing history with Legends, the acclaimed anthology of original short novels by some of the greatest writers in fantasy fiction, the long-awaited second volume is here.

Each of the best-selling writers represented in these selections from Legends II returns to the fantasy universe he or she made famous throughout the world. Whether set before or after events already recounted elsewhere, whether featuring beloved characters or compelling new creations, these masterful short novels are both mesmerizing stand-alones, perfect introductions to the work of their authors, and indispensible additions to the epics on which they are based.

Diana Gabaldon turns to an important character from her Outlander saga, Lord John Grey, in "Lord John and the Succubus", a supernatural thriller set in the early days of the Seven Years War.

Terry Brooks adds an exciting epilogues to The Wishsong of Shannara in "Indomitable", the tale of Jair Ohmsford's desperate quest to complete the destruction of the evil Ildatch...armed only with the magic of illusion.

Gabaldon good, Brooks not so much

I have to admit, I only bought it because I am a fan of Lord John stories, which is a combination of crime and life in the past - but not fantasy
Gabaldon’s short story can easily be understood by anyone never read a book from her, the surrounding storyline is just ancient history that everyone is familiar with. And the characters are well introduced. Altogether I very much enjoyed the story!
Unfortunately this short story is not so easily purchased on its own, it only goes together with other stories in the purchase, so I chose this compilation in the hope to get a little knowledge about the Shannaron world.

The story from Brooks is not so easily understood, loads of names are too briefly introduced as the pre-requisite seems to be reading the other books. The whole world is not described, I simply did not get a picture of the world.The surrounding storyline is a fantasy world and and absolutely not self-explanatory like the Gabaldon’s world.

So I assume if you are a fan of the Brooks books, you will have your fun.

I could give five stars, or at least four for the first story, but only two for the second
But for a single short story one full credit is far too much