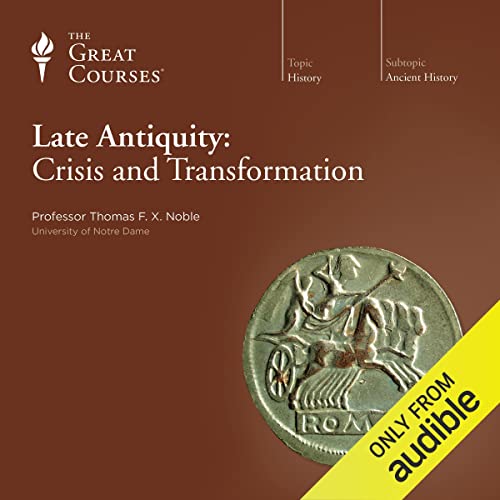 Edward Gibbon's Decline and Fall of the Roman Empire painted a portrait of the Roman Empire in a long, debilitating slide to oblivion, but now historians have reevaluated this picture to create a radically different understanding of the period now known as "late antiquity." Far from being a period of decline and fall, late antiquity marked one of history's great turning points.

These 36 half-hour lectures take you through five momentous centuries that link the classical world with the modern, beginning with Rome near its pinnacle of power and geographical extent and ending with the Byzantine Empire, the rise of Islam, and a succession of barbarian Christian kingdoms.

You'll explore key features of late antiquity including how this tripartite division occurred; the memorable rulers and religious leaders who led the way; and the architecture, visual arts, and literature of the period. You also study what it was like to live in the late antique world: How did people earn their livings?

What was the role of women in society? What distinguished the great cities of the era?

Nothing in Rome's previous experience compared with the ferment of late antiquity, which saw the unpredictable growth of new institutions, states, religions, and arts. After taking this course you will never think of the barbarians and the "fall" of Rome in quite the same way again. Your imagination will be alive with the incidents, innovations, and peoples of an exciting era that gave birth to us all: late antiquity.