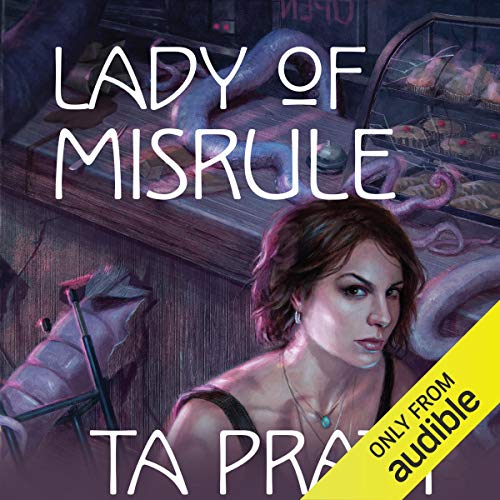 No rest for the wicked... or anyone else! Welcome to the world of Marla Mason, part-time goddess of death and former chief sorcerer of the Felport. It is a world full of snark, violence, weirdness, bad choices with surprising consequences, friendship, betrayal, villainous living severed heads, magic motorcycles, axes made of fragments of moonlight, monsters from beyond the multiverse, and other delights. Alternating one month in the mortal world and one month in the underworld, while Marla is on Earth she tries to do good and remember what it means to be mortal - often having to remind her adversaries of their own mortality. In Lady of Misrule, Marla awakens for her month on Earth and finds her allies missing and an old enemy causing trouble in her home city of Felport. If that wasn't bad enough, a charming gentlemen from beyond the multiverse has decided that murdering gods might make for an amusing pastime. He figures he will start with Marla. Now, with the help of her former apprentice, Bradley Bowman, Marla must rescue her friends, crush her enemies, and eliminate the aforementioned existential threat - before her month runs out and she returns to the underworld. Cover art by Lindsey Look.