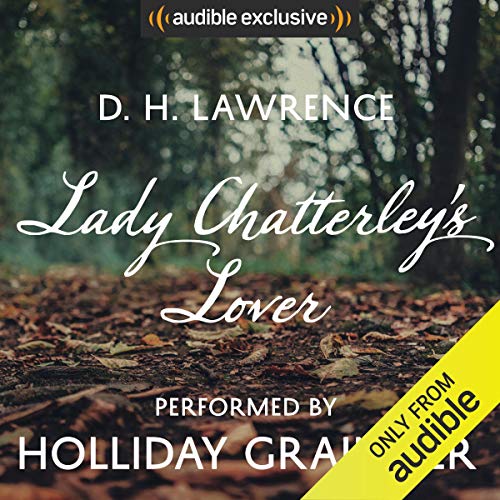 In an Audible Exclusive performance, Holliday Grainger lends her voice to a new unabridged recording of Lady Chatterley's Lover, a novel that was banned until 1960 and is now considered to be one of the most renowned love stories of all time. This production features an exclusive introduction written and narrated by Fern Riddell, a cultural historian who specialises in sex in the Victorian and Edwardian eras.

Dissatisfied by her loveless marriage to a crippled and impotent writer, Constance Chatterley seeks to escape from the confines of their upper class surroundings and the cold and passive relations she endures.

Upon encountering the gamekeeper of Chatterley mansion, Oliver Mellors, Constance is mesmerised and infatuated by his no-nonsense demeanour and passionate touch. The two soon forge a profound bond as a result of their sexual compatibility and sociopolitical views.

Banned until 1960, Lady Chatterley's Lover caused great controversy at the time it was written and was rejected for portraying what was then considered audacious, pornographic content. Of course critical opinion has evolved, and we have now come to see D. H. Lawrence's story as a revolutionary tale and literary masterpiece.

The exclusive introduction to this edition, written and narrated by cultural historian and writer of Ripper Street Fern Riddell, explores historical and contemporary reactions to this groundbreaking novel.

Lawrence fought hard against the conventions of the early 1900s society, which censored and persecuted those who promoted sexual freedom and challenged tradition. He wanted his writing, unlike his society, to be full of vitality, emotion and spontaneity. In so doing, he also contributed to the liberation of women all over the world who longed to be more than just dutiful wives.

In an obituary notice, E. M. Forster described D. H. Lawrence as 'the greatest imaginative novelist of our generation.'

Holliday Granger first graced our screens at the age of six in the BBC comedy drama All Quiet on the Preston Front. She has since gone on to star in TV programmes such as Waterloo Road, Merlin, The Borgias and Strike.

Holliday's film credits include The Riot Club, Bel Ami and Cinderella. Holliday played the lead role in the 2015 BBC adaptation of D.H. Lawrence's novel. Recognised for her outstanding performance as Constance, and bringing with her the experience of having skilfully narrated Dodie Smith's I Capture the Castle, Holliday excels in capturing the mood and pace of this titillating classic title.