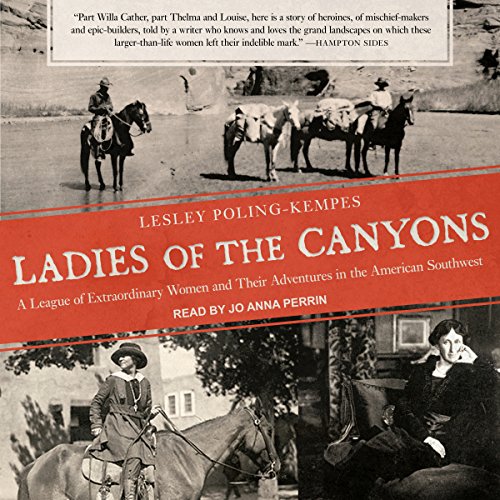 Ladies of the Canyons

Ladies of the Canyons is the true story of remarkable women who left the security and comforts of genteel Victorian society and journeyed to the American Southwest in search of a wider view of themselves and their world.

Educated, restless, and inquisitive, Natalie Curtis, Carol Stanley, Alice Klauber, and Mary Cabot Wheelwright were plucky, intrepid women whose lives were transformed in the first decades of the 20th century by the people and the landscape of the American Southwest. Part of an influential circle of women that included Louisa Wade Wetherill, Alice Corbin Henderson, Mabel Dodge Luhan, Mary Austin, and Willa Cather, these ladies imagined and created a new home territory, a new society, and a new identity for themselves and for the women who would follow them.

Their adventures were shared with the likes of Theodore Roosevelt and Robert Henri, Edgar Hewett and Charles Lummis, Chief Tawakwaptiwa of the Hopi, and Hostiin Klah of the Navajo. Their journeys took them to Monument Valley and Rainbow Bridge, into Canyon de Chelly, and across the high mesas of the Hopi, down through the Grand Canyon, and over the red desert of the Four Corners, to the pueblos along the Rio Grande and the villages in the mountains between Santa Fe and Taos.

Although their stories converge in the outback of the American Southwest, the saga of Ladies of the Canyons is also the tale of Boston's Brahmins, the Greenwich Village avant-garde, the birth of American modern art, and Santa Fe's art and literary colony. Ladies of the Canyons is the story of New Women stepping boldly into the New World of inconspicuous success, ambitious failure, and the personal challenges experienced by women and men during the emergence of the Modern Age.