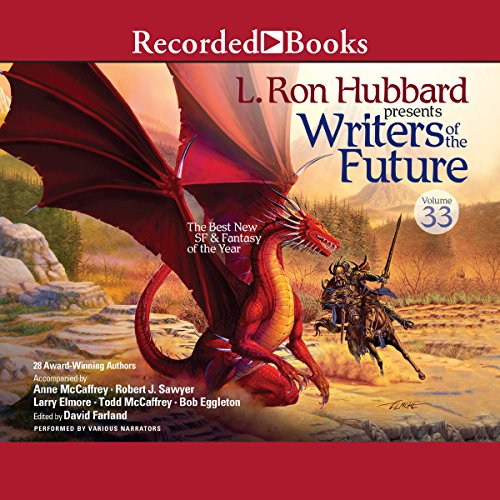 Explore diverse new universes of possibility through a variety of creative and fresh new ideas - all in one anthology. From dragons to mythical death dealers, from murder on the moon to deep space mystery, these stories bring you the hot new talent in science fiction, fantasy, and horror. Enjoy these award-winning stories, with bonus stories by New York Times best-selling authors Robert J. Sawyer, Todd McCaffrey, and L. Ron Hubbard. Learn how to write or improve your craft with tips from Grand Master fantasy author Anne McCaffrey and New York Times best-selling author L. Ron Hubbard.

When Gwen's husband is found murdered, she's the only suspect. After all, they were the only two people on the moon. ("Moonlight One")

Flora's father is a mech-soldier of the Slayer Class, but how much of him is really left inside the machine? ("The Armor Embrace")

When an alien with godly intelligence is discovered watching the earth, one man must try to learn if its motives are pure. ("Envoy in the Ice")

If you were stranded in an open boat and the only hope for rescue came from a ghost ship, would dare to ride? ("The Devil's Rescue")

Some gifts come with heavy price tags, and the giver must rise to the occasion. ("Tears for Shulna")

What if an alien asks for your help with a question, and the answer affects the future of the whole human race? ("The Drake Equation")

Barlow has a talent for finding the dead. Or do they find him? ("Acquisition")

When Varga sets out to explore the ancient stronghold of a long-dead wizard, she discovers that the ruins aren't as deserted as she thought. ("Obsidian Spire")

If only that reptile in the sewer were something as predictable as an alligator. ("Gator")

On a distant world among the cloud peaks, the light-hawks promise a rich reward for those daring enough to harvest one. ("A Glowing Heart")

In a world where memories can be stripped, Bill discovers that he has a family he has never known. ("The Long Dizzy Down")

Not all spirits have the best of intentions, and they must be dealt with. ("The Woodcutters' Deity")

You can put an end to something wondrous, but only at a cost. ("The Dragon Killer's Daughter")

In a life-or-death situation, sometimes you wish that you had a really powerful spell. But that begs the question - what is power? ("Useless Magic")

Some devils are as old as a dream and more evil than men can imagine. ("Adramelech")

When the world needs saving, three children are called to the task. ("The Fox, the Wolf, and the Dove")

Can an aging sorcerer find a way to track down his old nemesis with the small bit of magic he has left, or is he just fooling himself? ("The Magnificent Bhajan")

Listen to them - and enjoy!