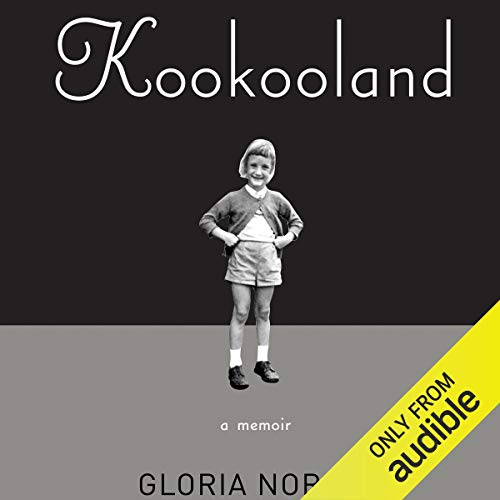 Gloria Norris' KooKooLand is a memoir written on the edge of a knife blade. Chilling, intensely moving, and darkly funny, it cuts to the heart and soul of a troubled American family and announces the arrival of a startlingly original voice.

Gloria Norris grew up in the projects of Manchester, New Hampshire, with her parents; her sister, Virginia; and her cat, Sylvester. A snapshot might show a happy young family, but only a dummkopf would buy that.

Nine-year-old Gloria is gutsy and wisecracking. Her father, Jimmy, all dazzle and danger, is often on the far side of the law and makes his own rules - which everyone else better follow. Gloria's mom, Shirley, tries not to rock the boat, Virginia unwisely defies Jimmy, and Gloria fashions herself into his sidekick - the son he never had.

Jimmy takes Gloria everywhere. Hunting; to the racetrack; to slasher movies; and to his parents' dingy bar, a hole-in-the-wall with pickled eggs and pickled alkies. But it's at Hank Piasecny's gun shop that Gloria meets the person who will change her life. While Hank and Jimmy trade good-humored insults, Gloria comes under the spell of Hank's college-age daughter, Susan. Brilliant, pretty, kind, and ambitious, Susan is everything Gloria longs to be - and can be, provided she dreams big and aces third grade like Susan tells her to.

But one night a brutal act changes the courses of all their lives. The story that unfolds is a profound portrait of how violence echoes through a family and through a community. From the tragedy Gloria finds a way to carve out a future on her own terms and ends up just where she wants to be.

Gripping and unforgettable, KooKooLand is a triumph.