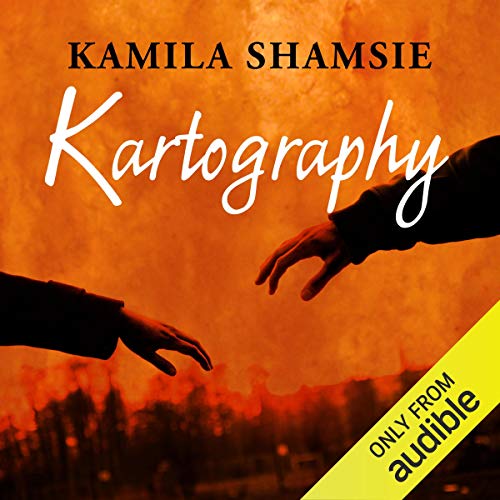 What is the moment, that exact moment when everything changes and the friends you have been become the lovers you might be? Soulmates from birth Karim and Raheen finish each other's sentences, speak in anagrams, and lie spine to spine as children. They are irrevocably bound to each other and to Karachi, Pakistan. It beats in their hearts - violent, polluted, corrupt, vibrant, brave, and ultimately, home. However, Raheen is fiercely loyal and naively blinkered and she resents Karim's need to map their city, his need to name its streets and to expand the privileged world they know.

When Karim is forced to leave for London their differences of opinion become a painful quarrel. As the years go by they let a barrier of silence build between them until, finally, they are brought together during a dry summer of strikes and ethnic violence and their relationship is poised between strained friendship and fated love. Impassioned and touching, Kartography is a love song to Karachi. In this extraordinary novel, Kamila Shamsie shows us that whatever happens in the world, we must never forget the complicated war in our own hearts.

Kamila Shamsie was born in 1973 in Pakistan. She is the author of five novels: In the City by the Sea, Kartography (both shortlisted for the John Llewellyn Rhys Prize), Salt and Saffron, Broken Verses and Burnt Shadows (shortlisted for the 2009 Orange Prize). In 1999 she received the Prime Minister's Award for Literature and in 2004 the Patras Bokhari Award - both awarded by the Pakistan Academy of Letters. Kamila Shamsie lives in London.

"Her characters are vividly realised; her enthusiasm for her story is infectious; her love for its location scorches the pages." ( The Herald)
"freshly written" ( The Independent)