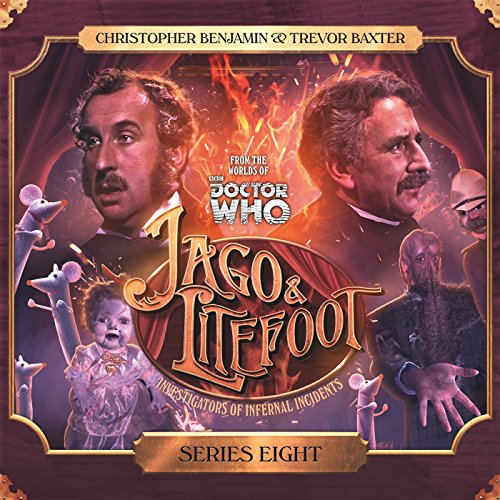 8.1 'Encore of the Scorchies' by James Goss
A special musical episode with stunning music and lyrics by Howard Carter! There's a new act at the New Regency Theatre, and Jago and Litefoot are about to face their grand finale.

8.2 'The Backwards Men' by Andy Lane
There's unrest on the streets of London and strange creatures who walk backwards. What is the link to Wednesday's World of Weird Wonders?

8.3 'Jago & Litefoot & Patsy' by Simon Barnard and Paul Morris
When a monster is discovered on the bank of the Thames, Jago and Litefoot team up with the mudlark Patsy to investigate.

8.4 'Higson & Quick' by Justin Richards
Jago and Litefoot can no longer be trusted. Can barmaid Ellie Higson and Inspector Quick save the day?